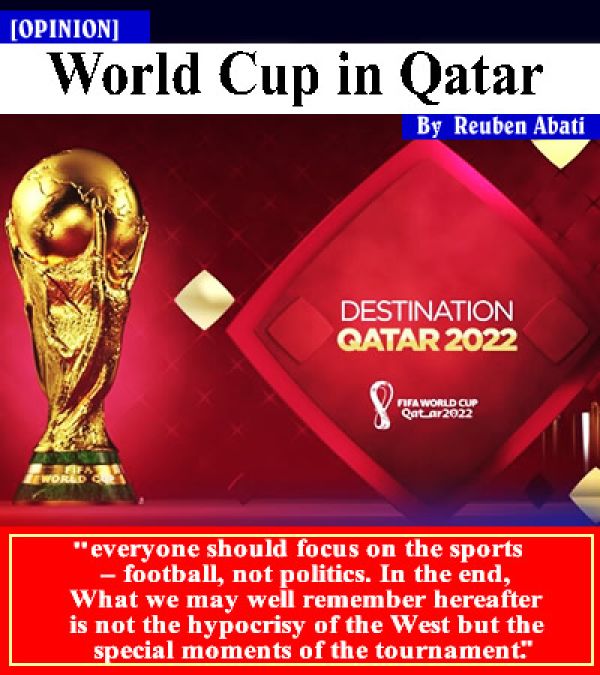 The 22nd edition of the FIFA football World Cup currently taking place in Qatar, the first-ever edition of the World Cup in the Middle East, is causing so much self-inflicted catarrh in the Western media due to the attempt by that wing of media practice to do everything possible to discredit the hosting of the World Cup by the Middle Eastern country. It has been said that Qatar “bought” the World Cup for sports-washing purposes, or that it is all about the money, and questions have been raised about LGBTQ+ rights, the treatment of migrant workers, human rights records of the Qatari government and the legitimacy of the entire event in the desert.

On Sunday, the games began. FIFA had warned before then that everyone should focus on the sports – football, not politics. In the end, I think what would be played up would be the hypocrisy of the West, and how the game itself would drown out every other ancillary matter and create a history of its own, which is already the case. What we may well remember hereafter is not the hypocrisy of the West but the special moments of the tournament.  On Sunday, the BBC practically ignored the opening ceremony of the World Cup. Major European countries have vowed not to show the matches in public places. Celebrities like Morgan Freeman and David Beckham who chose to identify with the Qatar World Cup have been vilified. But when it suits them, European leaders in the UK and France do business with Qatar. They even collect gifts from its rulers. They run to the country to look for gas supplies or to sell arms. We live most certainly in an unequal world where some countries believe that they can set standards for others as it suits them. In hosting this year’s World Cup, the Qataris are insisting on their own standards and sticking to them, on their own terms, putting a fresh accent on Samuel P. Huntington’s The Clash of Civilizations and Edward W. Said’s prognostications in his book, Culture and Imperialism.

The Qataris have insisted that nobody can drink beer or alcohol anywhere within the perimeters of the stadiums. Beer or no beer, history is already being made. Qatar is now in the history books as the first host country to lose an opening match. Yesterday, England walloped Iran 6-2.  The Iran team refused to sing their country’s national anthem in protest. They are obviously in Qatar for politics not football. Mane-less Senegal got beaten 0- 2 by the Netherlands. The last time Wales was in the World Cup was 1958. Yesterday evening, it was Wales 1- USA – 1. Football is worse than opium.