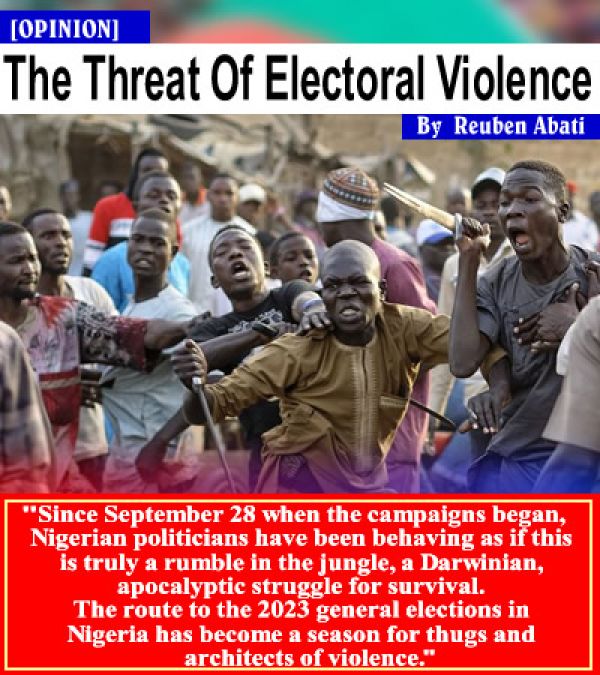 One of the major problems that we have had to contend with since the return to civilian rule in 1999, and even long before then in previous electoral cycles and subsequently – 1959, 1979, 1983, 1993, 1999, 2007, 2011, 2015, and 2019 more notably, has been the spectre of electoral violence - in the form of killings, attacks, assault, assassination, affray, before during and after elections. In 1965, following the assembly elections in the South West, Nigeria recorded a blow out of violent attacks, characterized in some of the reports as “We tie” or the “Wild Wild West”. It was standard practice in the First Republic for major political parties and leaders to engage the services of thugs, otherwise known as “able-bodied men”. Their job was to protect political leaders, and help rig the votes on election day. This became an established pattern in Nigeria’s elections, which are regarded more by the stakeholders not as a democratic process but war by another name. In 1983, during the Second Republic, there was post-election violence in Ondo State, involving Adekunle Ajasin and Akin Omoboriowo, the ugliness of which is fully captured in Dare Babarinsa’s book on the matter – House of War (2003). The Nigeria Security Tracker (NST) reports that 100 people were killed in election-related violence in 2003, 300 in 2007., and 800 in 2011.

Both the state and the political establishment participated in the promotion of this ugly phenomenon, so badly that it became a standard feature of Nigerian politics. Many of the thugs would eventually after the elections show up as persons of influence, having been rewarded generously by their paymasters with state largesse including political appointments or the Chairmanship of Road Transport Workers Associations, or the management of motor park garages where they run alternative tax collection systems which are deliberately overlooked by the state. Many of the political thugs who do not get rewarded for their efforts or who fall out with the leaders within their cells end up becoming criminals, or a threat to the established order to the extent that there is a connection between Nigerian politics and the criminal underworld. It is for this reason that every election season, politicians are constantly told to eschew violence, and they are made to pledge commitments to uphold reason, decency and civility.

In 2014, Nigeria witnessed ahead of the 2015 general elections, the emergence of a non-governmental organization, the National Peace Committee led by former Head of State, General Abdusalami Abubakar, and Bishop of the Catholic Church of Nigeria, Matthew Hassan Kukah. Today, the leadership of the NPC has been further expanded, and is far more representative of the influential class. Some of the leaders include the Sultan of Sokoto, HRH Sa’ad Abubakar III, Alhaji Aliko Dangote, Mr. Femi Otedola, Dame Priscilla Kuye, Archbishop Nicholas Okoh, John Cardinal Onaiyekan, John Momoh, Idayat Hassan, Gen. Martin Agwai (rtd) and Justice Rose Ukeje (rtd). Their core mandate has been the promotion of peace, justice and since 2014, the body has consistently ensured that political gladiators commit themselves to a peace accord, long before the elections. The NPC monitors compliance with the accord. It serves as a strong moral voice in political seasons that are  ever so likely to descend into rancour, hatred and bitterness.

In September 2022, ahead of the flag-off of campaigns for Nigeria’s 2023 general elections, the NPC announced that all the 18 political parties on the ballot would sign two peace accords. The first Peace Accord was signed at the International Conference Centre, Abuja on Thursday, September 29, at a ceremony attended by the All Progressives Congress (APC), the People’s Democratic Party (PDP), the Labour Party (LP), the New Nigeria People’s Party (NNPP), the African Democratic Congress (ADC), the Social Democratic Party (SDP), the Action Alliance (AA) and the Allied Peoples Movement (APM).  In a communique dated September 22, 2022, the National Peace Committee announced that “2023 is more than an election. It is an opportunity to serve Nigeria, to defend Nigeria and to uphold her unity and progress…Nigerians should avoid the spread of fake news and uphold the principles tolerance, respect, civility and decency in all public and private conversations and engagements about election and the progress of Nigeria..All political actors, especially their publicity agents and media advisers, should shun personal attacks, avoid insults and incitements; reject the spread of fake news and commit to issue-based campaigns and political rallies in the upcoming 2023 general elections”.

The facts suggest otherwise. Existing institutions and bureaucracies have proved incapable of dealing with electoral offences and particularly, the threat and menace of violence. INEC is right with its proposal that there is a need to provide a special framework for electoral offences and the necessary structures to bring those who violate the democratic process to book, no matter how highly placed they may be. It must be admitted that there are certain elements among us in high and low places who do not believe in the idea of Nigeria, who lack the milk of human kindness and decency and who will stop at nothing to place their personal interests/ambition above the country. They simply don’t care. The key target of the electoral process should be to stop such people, and rescue the country from their demonic grips. There is more than enough evidence to prove that this is not one of those lamentation odes. The biggest threat to the 2023 general elections is the threat of violence. The political parties may have signed the aforementioned Peace Accord, but the reality is that they have not seen any reason to imbibe the spirit of the accord. There are laws in place to check electoral violence, but the political gladiators think that it is business as usual. Our fear is that it could get worse, and things could get out of control. The worst part is that the security agencies appear helpless and confused, and that is why they are beginning to sound like preachers!

As at the time of this writing, less than 102 days to the general elections, starting with the Presidential elections on February 23, 2023, I repeat that the threat of violence is the biggest challenge that we all face. INEC has had to lament that 242 polling units in 10 Local Government Areas of Katsina State are at risk due to insecurity. The electoral body has also proposed that it could relocate the voters elsewhere, but even if that option is convenient for INEC, the question to ask is whether or not that would not lead to voter apathy or constructive, inadvertent disenfranchisement of many voters. It is not Katsina alone. INEC has also been a victim of nature-induced violence in many parts of the country, where as a result of floods, many of its offices have been submerged and many facilities destroyed. But the more critical problem would seem to be the organized attacks on INEC offices. In the past week, there were two major incidents: the attack on the INEC office at Iyana Mortuary in Abeokuta South Local Government in Ogun State. The office was set ablaze, reportedly by eight, unidentified persons, and perhaps unidentifiable persons who threw bread soaked in petrol into the INEC premises and lit a bonfire. About the same time in Osun State, a similar group also set the INEC office on fire. The loss is extensive. In Abeokuta, eight generating sets were damaged. Over 65, 600 Permanent Voters Cards (PVCs), 904 ballot boxes, 57 election bags 29 voting cubicles were either stolen or destroyed!   In Osun state, the resident electoral commissioner, Dr. Mutiu Agboke has said that despite the attack on the INEC office in Ede South LGA, the commission’s sensitive materials are still intact.  What is clear, however, is that some law-breakers are out there trying to instill fear in INEC as well as voters and sabotage the electoral process. If this trend continues, the entire 2023 elections will be derailed! INEC needs help.

The political parties are also in trouble. Since September 28 when the campaigns began, Nigerian politicians have been behaving as if this is truly a rumble in the jungle, a Darwinian, apocalyptic struggle for survival. The route to the 2023 general elections in Nigeria has become a season for thugs and architects of violence. The Labour Party, for example has had cause to complain about the harassment of its supporters in Ebonyi, Nasarawa, Katsina and Lagos States. The Peoples Democratic Party (PDP) has protested about attacks on its members and supporters in Kaduna, Port Harcourt, Zamfara and Maiduguri. Other political parties have had cause to complain about how they are denied the opportunity to paste posters or erect billboards or even gain access to the media especially in those states where incumbent Governors insist that the opposition would not be allowed to campaign. This amounts to a violation of the law, but they get way with it. What is even more disturbing is the rise of hate speech and the politics of intolerance perpetrated electronically by a peculiar group of social media bandits who speak without thinking, attack without any iota of civility, and who damage their candidates without sparing a thought for their own vulnerabilities.

The more saddening part of this narrative is that the security agencies appear to be helpless. At a recent meeting of the Inter-Agency Consultative Committee on Electoral Security (ICCES), the National Security Adviser (NSA), Gen. Baba Gana Monguno (rtd) confirmed the seriousness of the situation when he disclosed that with 52 cases of electoral violence in 22 states in one month, it was clear that some hoodlums were ready to derail the election. He should know. He is National Security Adviser.  At that event and elsewhere, the security agencies continue to promise that they are “on top of the situation” and that anybody who tries to derail the elections at any stage will be summarily dealt with. But can we trust the security agencies? In Maiduguri, Borno State, the recent attack on the PDP convoy was recorded by journalists who were present at the scene, but the Borno Police Command came out openly to declare that what had become open evidence was fake news. Did the Borno State Police Commissioner attend the Senior Police Officers Retreat in Owerri where President Muhammadu Buhari, before he jetted out for two weeks, admonished police officers to be neutral and professional in the discharge of their duties in the 2023 elections. Mr Commissioner Abdu Umar was probably there and he dozed off when the President was making that point! Many of these guys sleep on duty anyway. And that is why they tell shameless lies. The Borno State Police Commissioner should be summoned by the Inspector General of Police.

We need all the security agencies to be awake and alive as we move towards the 2023 general elections. The country’s security chiefs should stop lamenting and preaching. They should do their work, professionally, and stop whining.