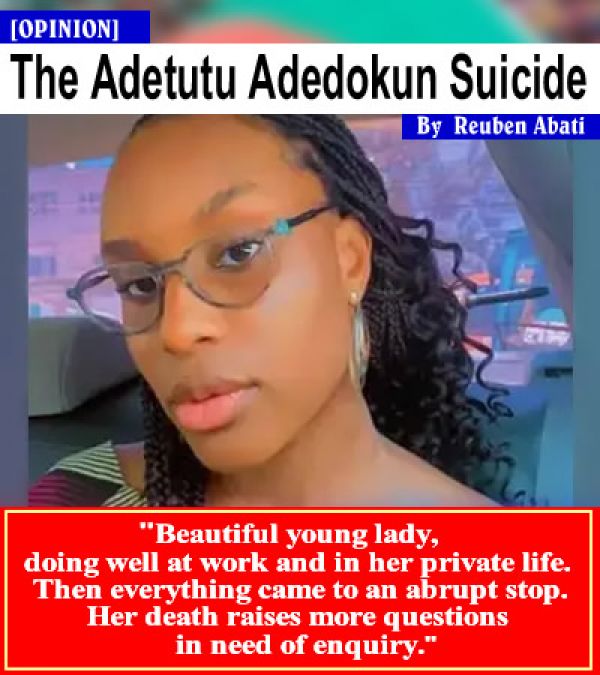 This is turning out to be a horrible year, with the latest house of horror news that now defines Nigeria being the report of a young lady who jumped to her death a few days ago on the Third Mainland Bridge in Lagos. Ms Adetutu Adedokun was said to have been a staff of the Department of State Services (DSS). She had only recently been promoted for her sterling performance at work as an unarmed combat operative in her set. In addition to the promotion at work, she got affianced.  Beautiful young lady, doing well at work and in her private life. Then everything came to an abrupt stop.

The key story that we have heard is that the Uber driver taking her from the Mainland to the Island said she was quarrelling with her fiancée on the phone, before she asked him to stop the car and she jumped into the lagoon. It is shameful that even the security agencies have been promoting this narrative. One of the problems with the security agencies in this country is that they lack the capacity for intelligence gathering and investigation. They find it too easy to adopt a simple story that is often most suited for pepper soup joints. Suicide is sad. It is an irreversible act of violence against the self. It raises questions about our mortality and why people decide to end it all. More than 72 hours after Ms Adedokun, an officer of the state, died, there have been no solid leads from the state authorities. Not even from the DSS she worked for.

Her death raises more questions in need of enquiry. Who is the Uber driver in question? Why was he so quick to offer an explanation and identify a suspect? Is it standard practice for Uber drivers to eavesdrop on their passengers’ phone conversations? Why did the Uber driver stop the vehicle when he was asked to do so, when there is certainly no bus stop on the Third Mainland Bridge? The Uber driver in this case must not be allowed to go. He must tell the security agencies what he knows. Another question: is it likely that there is a linkage between Ms Adedokun’s work and promotion and her sudden death? What secret state matters was she working on before her death? Where is her fiancee? Has he been called in for questioning?

In recent times, more women have committed suicide in Nigeria. Is there a gender explanation? Before Adetutu Adedokun, there was Afolake Abiola, the Globacom Chartered Accountant. When these incidents occur, we express sorrow. The security agencies do nothing and we all wait till another person dies. Not good enough. Every case of alleged suicide must be thoroughly investigated to establish the truth.