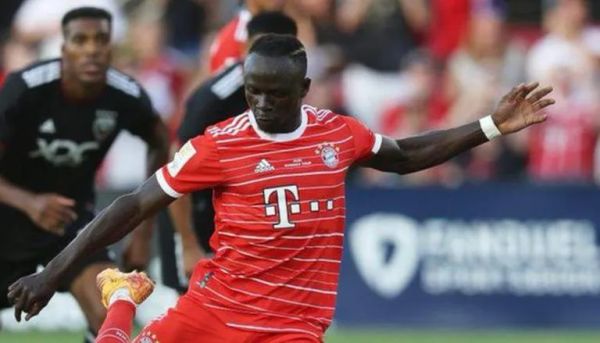 Mane, who joined the Bundesliga giant was in the line-up for his side’s match against the Czech side, Victoria Plzen at the Alianz Arena.

It did not take the German side too long before hitting the back of the net as they led with two goals after 13 minutes.

With a rocket from 20 yards out, Leroy Sane gave the Bavarian giants the lead. A powerful shot that went into the top corner was delivered by the German forward after he had pushed up the field.

Shortly after, Gnabry doubled his team’s lead as he rolled the ball into the bottom corner as soon as he spotted an open chance.

In the 21st Minute, Mane scored a beautiful solo goal after receiving the ball from a throw-in and outpacing two opponents with a flick over his head then breaking through with an incredible speed, producing a calm finish in a one-on-one with the goalkeeper.

Since joining Bayern from Liverpool in the summer, Mane has scored seven goals for the club.

Leroy Sane and Eric Maxim Choupo-Moting extended the lead in the second half with Sadio mane providing a good assist for Sane.

According to William Hill, Mane is the fourth African player to have scored 25 or more goals in the Champions League. He joins a distinguished list that includes Didier Drogba, Mohamed Salah, and Samuel Eto’o.