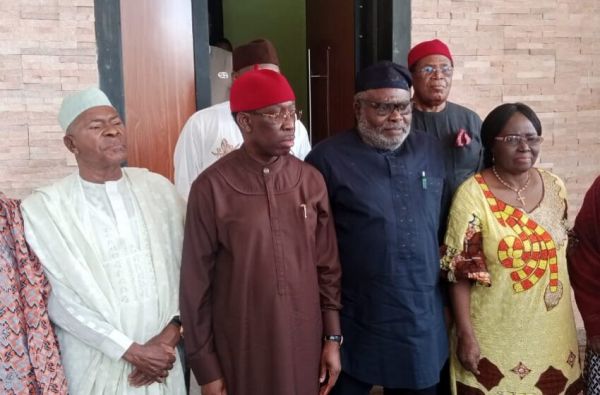 Ahead of the 2023 election, the Del­ta State governor and the Vice Pres­idential candidate of the Peoples Democratic Party (PDP), Ifeanyi Okowa has said that the aggrieved governors and other members of the party will work for the victory of PDP.

Speaking shortly after the Board of Trustees (BoT) met with him in Abuja, Okowa said that the gover­nors and other members, who are aggrieved, would work for the par­ty and would not destroy it.

He said: “Governors and other members who are aggrieved are members of the party. I believe that my brothers will all work for the party. PDP is home and they belong to that home.

“They’re not going to destroy their home. I do believe that we’ll continue to talk with ourselves and resolve the little issues that are left.”

Narrating the journey taking so far to address the crisis rocking the party, Okowa said: “We are talking among ourselves as governors, re­alising that there are several lead­ers within our party from across the country. We’ve been talking with ourselves.

“I believe that there is still a little work to be done, but a lot has been done. We are largely reconciled. There are still issues to be dealt with. That’s why you see some of the leaders of the party, the Board of Trustees, here today.

“We have had very useful dis­cussions on what they could do and what we ought to continue to do as a party. But, because the PDP is a very large party, we understand that. Yet, there is some level of dis­agreement, but we will continue to stay in touch with ourselves to re­solve the issues.

“Last Tuesday, on the 27th, we were in the Southeast. Our brother, the governor of Enugu State, host­ed us very well. That’s a very posi­tive step forward. We had very use­ful interactions with all our leaders in the Southeast and I think that is a great plus for us as a party.

“And I believe too that you’re aware too, that we were in the Southwest, where we were very well received by Governor Seyi Makinde and the stakeholders of the party.

“The few issues are still left on the table. I’m sure we’ll come to discuss it and in the next few days, we are convinced that we will be largely reconciled.”

Disclosing their mission, Adol­phus Wabara, the PDP’s BoT Chairman, said that they came as the special reconciliation commit­tee of the Board of Trustees to visit “our vice presidential, candidate, Governor Okowa, on the ongoing crisis, and also to proffer solutions to those issues.

“We were properly briefed by His Excellency, the vice presiden­tial candidate, on these issues.

“The committee is enlightened now on the issues and we’re mov­ing forward. Like I said the last time, we have been going around and we met most of the governors.

“In the coming days, we will also meet with the principal, the presidential candidate, former Vice President, Atiku Abubakar, and from there, we will proceed to meet with Governor Wike.

“We have met with some other governors. We have met Governor Samuel Ortom, Governor Seyi Ma­kinde, Governor Ahmadu Fintri, Governor Ikpeazu and Ugwuanyi of Enugu State.”