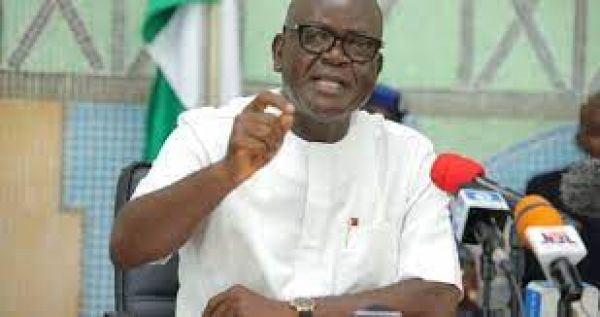 The Benue State Governor, Samuel Ortom, had lambasted the All Progressives Congress in the state for describing him as an errand boy to the Governor of Rivers State, Nyesom Wike.

Recall that the Chairman of APC, Benue State chapter, Austin Agada, had alleged that Ortom abandoned governance in Benue “to run errands” for his Rivers State counterpart.

Reacting to the comment, Ortom, in a statement issued on Sunday by Special Adviser, Media & Publicity, Terver Akase, lambasted the APC leader, saying he leads the party as a man leading a group of thugs.

The statement reads, “it was not the first time that the young man who runs APC in Benue as if he is leading a group of thugs would insult the Governor of his state in the manner he did.

“A party chairman who was beaten to a pulp in his community Otukpa by aggrieved members of APC who were protesting against the fraudulent governorship primary election he conducted in May this year lacks the moral authority to question the leadership abilities of anyone else.

“Agada and others who write and speak for the APC in Benue State were apparently too young to know that the leader of their party, Senator George Akume as Governor of Benue State between 1999 and 2007, was a very close friend of the then Rivers State Governor, Dr Peter Odili.

“Obviously, the APC state chairman has also not heard of the long-standing relationship between Governor Aper Aku of Benue State and Governor Melford Okilo of Rivers State during the 2nd republic. Agada has no idea that cordial relations among state governors are vehicles for development.

“Governor Ortom’s relationship with Governor Wike is built on mutual respect, progress and benefit of the two states. The Governor has, at different times, invited his Rivers counterpart and several other Governors to Benue State to commission numerous projects, the same way Governor Wike invites him to reciprocate the gesture in his state.

“The Speaker, House of Representatives, Femi Gbajabiamila, was also honoured with a chieftaincy title at the same event.
The ceremony was preceded by the commissioning of four major roads, which Governor Ortom constructed in Gboko.

“Only last month, the G-5 Governors made up of Nyesom Wike of Rivers, Ifeanyi Ugwanyi of Enugu, Okezie Ikpeazu of Abia and Seyi Makinde of Oyo were in Makurdi on the invitation of their host and member of the group, Governor Samuel Ortom where they commissioned a number of projects.

“The above development strides of Governor Ortom do not by any stretch indicate abandonment of governance. We, however, understand that the featherbrained attempts by the APC leadership in Benue State are targeted at painting in dark colours anything done by the Ortom administration.

“Just yesterday in Port Harcourt, Governor Ortom was given one of the highest honours in Rivers State by the government and people of that state. Interestingly, the APC in Benue State is silent on the fact that some Governors on the party’s platform, such as Yahaya Bello of Kogi and Dave Umahi of Ebonyi were among the award recipients.

“If that amounted to “running an errand” for Governor Wike, then Governor Ortom was not alone on the “trip”.

“The Benue APC chairman and his band of hang-about officials keep shifting the goalpost in the course of the game. Before now, their narrative was that the Governor had not recorded any achievement.

“With the frequent commissioning of projects, their songfest has moved to the despicable level of denigrating the Governor in a style of street urchins.

“The Agada-led state working committee of APC has not been able to accomplish any task since they took over the reins of the party. They run the party in a racketeer fashion.

“From pouring invectives on major stakeholders of the party to crass ineptitude accompanied by arrogance and rascality, the only known achievements of the inexperienced APC leadership in Benue were extorting huge sums of money from aspirants before the party primaries and the reported embezzlement of funds meant for delegates to the party’s national convention in Abuja.

“Their failure to conduct free and fair primaries led to a number of litigations against the party and the mass defection of its members to PDP and other political parties across the state.

“Governor Ortom remains committed and focused on the mandate of serving Benue people. The Governor will not be distracted by any volume of smear campaigns from the opposition”.