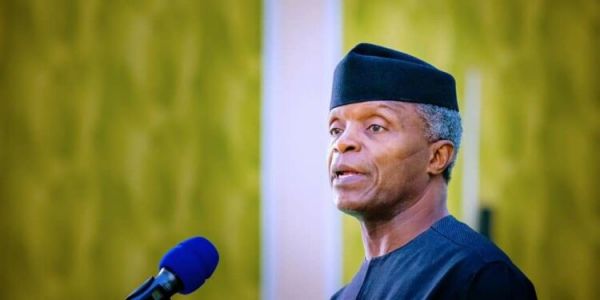 Vice President Yemi Osinbajo (SAN) says he foresees a better future for Nigeria, as the nation prepares to celebrate its 62nd independence anniversary.

Osinbajo insisted that the country would not be destroyed by the myriads of challenges confronting it.

He spoke during the Independence Anniversary Service held at the National Christian Centre, Abuja on Sunday with the theme: ‘Those Who Wait on the Lord Shall Inherit the Land’.

The Secretary to Government of the Federation, Boss Mustapha, heads of security agencies, other top government officials, church leaders, politicians, diplomats, community leaders, women leaders and youth leaders were among those who graced the event.

If elected president, there would be free medical care for 100m poor Nigerians – Peter Obi
Referencing the Book of Deuteronomy 33:25, which reads ‘As your days so shall your strength be’ the VP said, “The future of Nigeria will be far more glorious, more peaceful than our past. And so it shall be for you to every year you will be happier. Every year will be more glorious, more prosperous and more peaceful.

“We are confident that God who owns the heavens will fulfil his promises concerning this nation despite the present challenges.”

Earlier, the President, of the Christian Association of Nigeria (CAN), His Eminence Archbishop Daniel Okoh, in his sermon titled, ‘The Righteous Shall Rule the Land’ cautioned believers against engaging in acts that will destroy the fortunes and prospects of the nation.

According to him, “We must be guided by the scriptures in all situations. We must continue to speak up and stand up against injustice and work for peace in a constructive way so that we shall enjoy the pasture of the land.

“We must give leadership to peaceful resolution of these issues that tend to further polarize us.

“Rumour-mongering and hate speech will not help. This is the time Christians must show spiritual maturity, integrity and dignity in engagement. We shall not give up.”

Okoh described the year 2023 as the year of Nigeria’s test as a nation; stressing that rather than take up arms to kill each other and terrify innocent Nigerians, adults in the nation should take up their voters’ cards and go to the polls.

He charged, “Those who already have their valid voter’s card should ensure that they don’t misplace it or expose it to where it could be stolen or destroyed. Those who have registered and have not received their PVCs should endeavour to get them and keep them. If you have registered but found it difficult to get your PVC, report to your church leaders or better still to the office of the Christian Association of Nigeria nearest to you in your state.

“Let me counsel that we must resist any threat (strong or subtle) in whichever form to stop us from going out to vote on the day of elections.

“We should have learnt our lessons to know that politicians who presented some inducement to voters, especially on the polling day were not really interested in the welfare of the people because they disappeared and made themselves unreachable and unavailable to those who elected them after they had been elected.”

The CAN president urged Nigerians to look out for politicians who are genuine and who are sincere to provide the basics that will be the catalyst for economic growth and development.

“I do not believe that all Nigerian politicians are the same – there are still those that God had prepared for this time. Open your eyes and listen, you will find them,” he added.

He urged Nigerian youths not to reduce themselves to body shields to politicians that have no interest in their future; adding that neither should they allow themselves to be used as pawns on the chessboard of the reckless political game.

“The Youth should not allow certain unscrupulous persons to use them to destroy their own future.

“At the same time, I call on the Federal government to do all that is necessary so that most of these youths will go back to the universities and be engaged with their studies.

“I urge the government at all levels to provide basic infrastructure – security, good roads, constant electricity supply and basic health care for citizens and other residents in Nigeria.

“Above all, let us not be weary in praying to our Lord to rescue Nigeria from the hands of wicked people,” he explained.

In his remarks, the SGF Boss Mustapha thanked those present at the occasion and expressed optimism that Nigerians will gather again for the swearing-in of a new president for the country after peaceful elections in 2023.