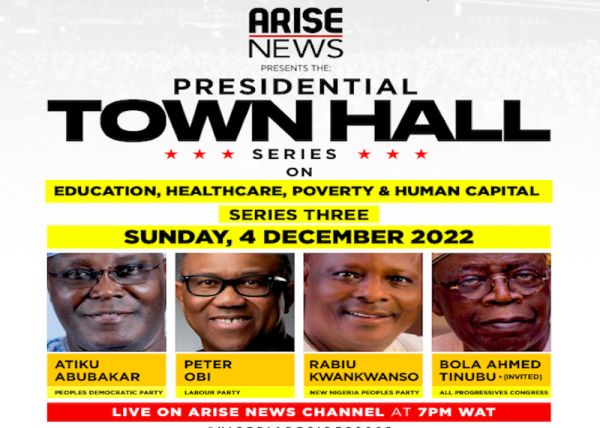 With a crucial general election due in less than three months, especially, given the current campaign frenzy by some of the political parties and their presidential hopefuls, the Arise Town Hall presents a platform, albeit a constitutional media undertaking, for aspiring office holders to dialogue, debate the issues and as well, canvass for votes.

The other leg to this is that, the forum, in addition, provides opportunities for the electorate to interrogate the proposed policies and programmes of the candidates, enables voters to make informed choices on who should lead them, having effectively understood the policies leanings and development orientation of the candidates.

This is why it is incumbent on the candidates, as responsible and patriotic citizens, who genuinely desire to serve the people, to show up and demonstrate that the policies they’ve been proposing for Nigerians would best suit the country.

Section 22 of the 1999 constitution, which empowers the media to undertake such responsibility, states that, “The press, radio, television and other agencies of the mass media, shall at all times be free to uphold the fundamental objectives contained in this chapter and uphold the responsibility of the government of the people.”

This, understandably, is the underpinning motivation behind the ARISE News Town Hall, whose third in a series, holds this Sunday, December 4, 2022, at 7pm.

Thus, the third edition, which seeks to focus on education, healthcare, poverty and human capital, is expected to feature four of the leading presidential candidates.

In a public notice released to this effect, organisers of the town hall, stated that, “In furtherance to this constitutional duty, ARISE NEWS Channel will host the third in the series of Presidential Town Hall and expects all candidates seeking elections to form government under this constitution, to respect the letters and spirit of the law, either on ARISE NEWS Channel or any broadcast channel or media of their choice, to respond to questions from independent journalists in keeping with the fundamental objectives, responsibility and accountability required by the constitution, for those who wish to lead us.”