The Federal Government’s plan to borrow about N720 billion through FGN bond auctions in the third quarter, Q3’22, has come under fresh threat following  increasing investors’ appetite for higher yields triggered by the adoption of  tight monetary policy of the Central Bank of Nigeria, CBN.

This development effectively spurred increases in money market yields while intensifying investors’ appetite for higher returns across all instruments in all segments of the market. 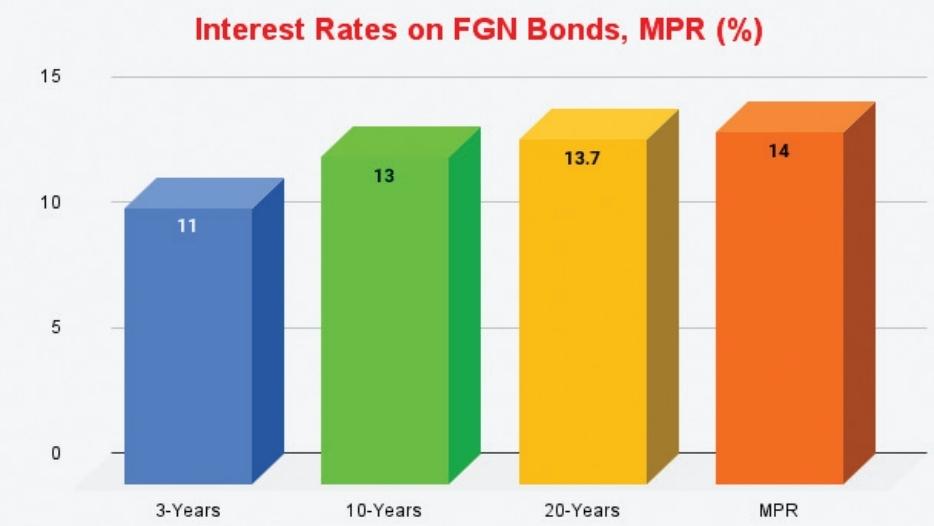 Consequently, the first under-subscription was recorded in  FGN bond auction this year, as the auction held in July recorded 37 per cent under subscription and as a result, Debt Management Office, DMO could not achieve its sales target.

According to the FGN bond auction calendar for Q3’22 released by the Debt Management Office, DMO, the FG plans to raise between N630 billion and N720 billion during the quarter.

The calendar shows that  the FG, through the DMO, seeks  to raise between N210 billion and N240 billion in each of the three months in the quarter, through subscription in three tranches of 10-year, 10-year, and 20-year original tenor respectively.

But the N225 billion FGN bond offered by the DMO at the July auction recorded 37 per cent under subscription as total subscription stood at N142 billion.

Consequently, the DMO could only achieve total sales of N123.9 billion, representing 45 per cent of its target for the month.

This was in spite of slight increases in the interest rates on the bonds offered by the DMO.

Investment analysts however noted that for the DMO to attract investors to future auctions it would have to offer higher rates given the inflation rate of 18.6 per cent and MPR at 14 per cent.

While noting that in spite of the impact of scarcity of funds and increasing appetite triggered by the CBN’s tight monetary policy, on future bond auctions, they expect the DMO to meet its funding target of N3.53 trillion to finance the projected deficit of N7.35 trillion  in the FGN’s 2022 budget.

Speaking in this regard, analysts at FBNQuest Securities, associated company in the First Bank Group, said: “The total amount raised by the DMO this year amounts to N1.7 trillion. If we include sales based on non-competitive allotment, the gross amount rises to N1.96 trillion. This excludes smaller sums raised via other instruments including Sukuk and the FGN savings bond.

“Despite the DMO’s disappointing outing, the sum raised so far by the agency suggests that it is broadly on track to raise its total domestic funding target of N3.5 trillion (including the additional borrowings of N965 billion following revisions to the budget).

“However, the tight liquidity conditions in the market may continue to negatively affect demand at auctions in the near term.

“There are tougher credit conditions on the international market following monetary policy tightening by most central banks globally. This may force the FGN to turn to the domestic market to source some of the N2.6 trillion in external borrowing highlighted in the 2022 budget.

“The last resort would be for the fiscal deficit to become unfunded, or in other words, funded by ways and means advances from the CBN.

“Given the tight liquidity conditions in the market, we see yields inching up by around 25-50bps across the curve over the coming weeks.”

Similarly, analysts at United Capital Plc, associated company in the First Bank Group, said: “In line with our expectations of an uptick in the yield environment in the sovereign bonds market, marginal rates across all the tenors climbed 90bps, 50bps, and 60bps to print at 11.00%, 13.00% and 13.75%, respectively. Investors opted toward a more relaxed approach in the auction, demanding higher yields, as the expectation of inflation, interest rates, and political risks all begin to crystalise. These follow persistent inflation, monetary policy normalisation globally and the increased perception of political risk as we approach the electioneering season.

“We expect a continued uptick in marginal rates at subsequent bond auctions, as we believe investors will remain standoffish. The DMO will need to reel in higher rates to attract fund managers’ interests.

“Notwithstanding, we maintain the FG’s apparent need to rely on the domestic debt market to fund its fiscal imbalance, as external debt market conditions remain unfavourable.   These factors will further impetus for shifting pricing power away from the FGN/DMO and into the hands of private sector asset managers.”

Pat Attah: I’m not a pastor

Some top APC stakeholders may not work for Tinubu’s candidacy

Gunmen Hide under Biafra Agitation to Kill in South-east - Army