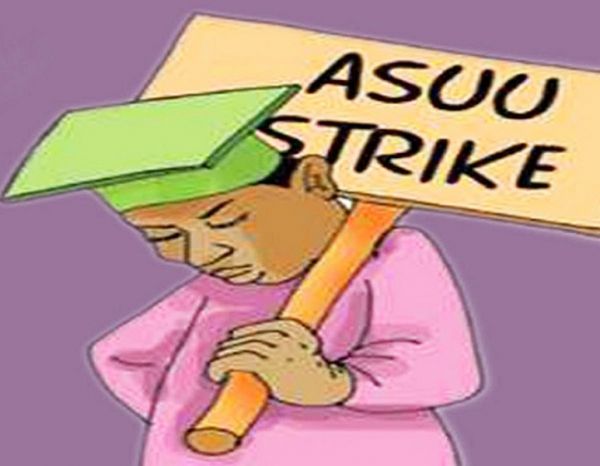 The federal government has advised the Academic Staff Union of Universities (ASUU) to stop acting in defiance of the interlocutory injunction by the National Industrial Court (NICN) which restrained the union from further action.

It said ASUU should cease taking laws into its hands by directing its members to continue with the 8-month old strike
In a statement in Abuja, the Minister of Labour and Employment, Senator Chris Ngige said a new directive by ASUU, exhorting its members to continue with the industrial action was an unwarranted lawlessness, noting that, “the federal government strongly frowns at this.”

But ASUU president, Prof. Emmanuel Osodeke had said its members were not bound by industrial Court order to resume work since the union had appealed against the ruling and was awaiting hearing on the request for stay of execution from the court.
However, in its latest statement, the federal government accused the leadership of the union of misinforming and misleading its members and warned of consequences of contempt of court order.

“The union is dishonest and misleading its members and the general public that it has filed an appeal as well has a stay of execution of the order of National Industrial Court on September 21, 2022, though it has none of this.
“Rather, ASUU only filed an application for a permission to appeal the order. It also attached to the application, a proposed notice of appeal which it intends to file if the leave to appeal is granted. The application for a stay of execution as of this moment has not even been listed for hearing. Where then is ASUU coming from?

“It is therefore contemptuous, dishonest and misleading for the union to tell its members that it has not only appealed the interlocutory injunction by the National Industrial Court, directing it to call off strike and return to work, but that it also has a stay of execution.”
The minister once again called on the union to respect the court order and return to work while negotiations are concluded on the remaining issues in contention.

In the statement signed by the Deputy Director, Press and Public Relations, Olajide Oshundun, also denied reports that the minister walked out on the meeting between the House of Representatives and ASUU last Thursday, 29 September, 2022. It said the minister left the meeting to attend to other pressing matters with the permission of the Speaker of the House of Representatives, Hon. Femi Gbajabiamila after making his presentation. It stated that the Secretary to the Government of the Federation was earlier granted such permission by the Speaker.

It further recalled that at that meeting, Senator Ngige addressed the two major issues over which ASUU was still on strike.
“On renegotiation of salaries and wages of lecturers, I sympathise with ASUU just like other Nigerian workers. The economy is bad and hard time, biting hard on everybody. ASUU deserves no blame. They know that many times during reconciliation, I said that left to me, this is what lecturers will get. I know the enormity of the work they do and have brothers who are also lecturers.

“The Briggs Committee was the product of reconciliation of my ministry, which had to move to the ASUU’s direct employers – Ministry of Education for a Collective Bargaining Agreement, so we can arrive on what is good to be paid to ASUU, subject to approval by the President

“The president has a Presidential Committee on Salaries and Wages chaired by the Minister of Finance, with myself as co-chair and other members – National Salaries Income and Wages Commission, Budget Office etc. “Every MDA whether drawing from the treasury or not, must pass through this committee on any issue concerning salaries for approval, before transmission to the president. The report of the Briggs Committee did not unfortunately pass this route.”

The minister revealed that when the issue of payment platform – UTAS – came up on January 9, 2020, he was the one that persuaded the president to give the platform a trial in the spirit of Executive Order 3 and 4.

“The SGF supported me. That was how I took it upon myself to write to all the parties, Communication and Digital Economy, NITDA, ASUU and others. At a point, I had to spend three and half hours at the Office of the Accountant General, while UTAS was on demonstration because we must support this platform that promised to save us foreign exchange.

“If the system is good, we adopt it for the whole country but meanwhile – the hardware is not there. How do you do it? The test- the three of them – IPPIS, UTAS, UPPPS – have failed the test. Do you recommend something that has failed a test? So, no matter how I love ASUU, I won’t support something that failed a test.
“I had advised ASUU when the first result came, to have UTAS do a handshake with IPPIS so as to capture all the university system peculiarities. They accepted but while negotiation was going on, they went on strike.”

The minister also narrated how the medical doctors once threatened to go on strike over IPPIS.
“But their peculiarities have now been captured by IPPISS, even those teaching in the universities with special allowances. About a year ago, NARD wrote me that they would go on strike if we don’t put them on IPPIS. This is because all their peculiarities have captured and no one is losing anything.”
Meanwhile, ASUU yesterday said the country needs true national followers and leaders who could deliver good governance and pursue ultimate happiness of the generality of Nigerians.

The Chairman, University of Ibadan chapter of the union, Prof. Ayoola Akinwole, in a statement yesterday, on the state of the nation and country’s 62nd national independence celebration, said Nigeria has been piloted by internal colonisers who promote domination of their people.
According to him, “If the essence of government is to make life bearable for the governed, many people who witnessed colonial rule would be regretting the current state of Nigeria. The way and manner in which the ruling class have piloted the affairs of the country since 1960 is nothing but internal colonialism and domination,” he added.

He maintained that there was nothing to roll out the drums for in Nigeria, stating that it was a shame for successive government to be unable to solve electricity challenge and make education in the country the driver of its development.
“A cross-section of Nigerians will, no doubt, agree that there are no grounds for celebrations and fanfare, due to the deplorable state of affairs in the country,” he said.

The ASUU boss who enjoined Nigerians to reject subjugation, said the treatment meted out to Nigerians, most especially the intelligentsia by the government and ruling class, most especially in the current administration of President Muhammadu Buhari, was terrible, stating that it also reflects the oppressive tendencies of some university administration on workers’ unions.
He said, “The payment of N30, 000 as minimum is worse than slavery. The non-payment of salaries for over seven months is inhuman treatment aimed at depriving them of their humanity and turning them into modern slaves.

“The Nigerian ruling class represents the worst form of evil of internal colonialism unknown anywhere in the modern world. They mobilise the resources of the country and cart same away to foreign land, leaving their country and citizens in penury and deprivation.
Nowhere is the decadence of an independent Nigeria is more abysmal than in the education system.”

Akinwole however applauded the National Association of Nigerian Students (NANS) for their social consciousness demonstrated, “in this trying period, defying authorities whose own children have been ferried abroad to study in universities and fees paid with money obtained from our common treasury.”