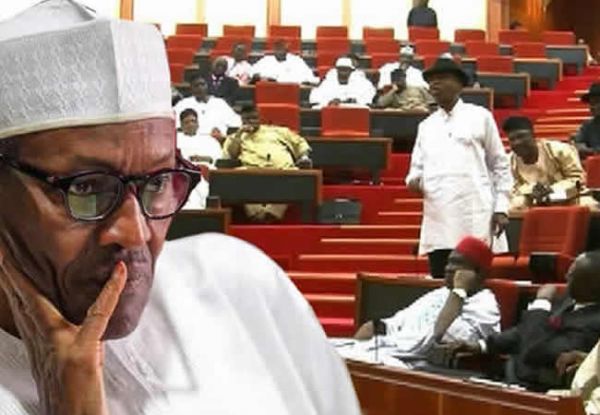 As the Senate resumed plenary, Tuesday, senators kept mum on their clamour for impeachment proceedings against the President, Major General, Muhammadu Buhari( retd.).

Senators across the opposition political parties like the Peoples Democratic Party, the New Nigeria Peoples Party, the Labour Party, the All Progressives Grand Alliance, the Young Progressives Party, and some of their colleagues in the ruling All Progressives Congress, had in the heat of worsening security situation, threatened the President with impeachment proceedings before their six weeks recess.

Upon resumption, none of the senators raised the issue nor debrief the media after their closed-door meeting.

Instead, the President of the Senate, Ahmad Lawan, in his speech, said, “Distinguished colleagues, just before we embarked on our recess, the Senate showed serious concerns about the Security situation in the country. We had intimate discussions on the security challenges across the country.

“Consequently, the Leadership of the Senate had two engagements with the Office of the National Security Adviser, the Chief of Defence Staff, Service Chiefs, Inspector General of Police, the Director General of Department of State Services, Director General of the Nigerian Intelligence Agency and other heads of other security agencies precisely on August 5, and September 12, 2022, to ensure that our defence and security agencies improve on their operational strategies to secure citizens and indeed our country.

“From the assessment of the prevailing situation, our security agencies are recording more successes and the situation seems to be improving.

“Nonetheless, the Senate will continue to engage with the defense and security agencies through its appropriate committees, to ensure that the engagements are sustained.”

Before the commencement of plenary, the Chief Whip of the Senate, Senator Orji Uzor-Kalu, told journalists that the move had fizzled out.

Kalu, who stated this while fielding questions from journalists, said even if such a move was made now, it would be knocked off as the majority of the senators were now behind the President.

He stated, “The issue of impeachment is a non-existing one. Nobody is talking about it again. Even if they try, they will fail because we have the number to resist it.

“There is nothing wrong with a lawmaker coming up with an impeachment threat but will they succeed? No. So, as far as I am concerned, there is no discussion about Buhari’s impeachment because security has improved.

“We have been meeting with the service chiefs and some of you were there and can testify that the issue of security has improved and it will keep improving. ”