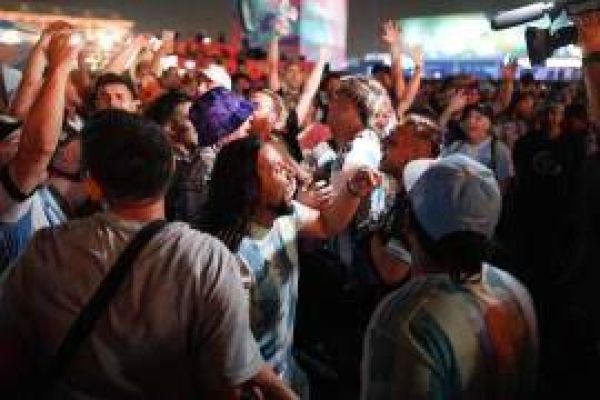 United States Secretary of State Antony Blinken recently came out against a ban on rainbow armbands at the World Cup tournament in Qatar, which various European team captains had intended to sport in support of LGBTQ rights and against discrimination. Blinken flagged the ban as “concerning” and a restriction on “freedom of expression”.

The secretary’s scolding came on the heels of another rather “concerning” development on the world stage: a mass shooting at a gay nightclub in the US state of Colorado that killed five people and wounded 18 others. This, in a country that fancies itself the global role model in terms of respect for freedom of expression, human rights, and all that good stuff – and yet where it is becoming increasingly difficult for people to exercise their right to not be massacred at nightclubs, elementary schools, places of worship, shopping malls, and so on.

In 2016, the US witnessed its worst mass shooting in history when 50 people were killed in an attack on a gay nightclub in Orlando, Florida.

This year, an independent UN human rights expert found that LGBTQ rights in the US are “under a concerted attack” and being “deliberately undermined” by state governments. Add to this landscape the institutionalised racism and discrimination that constitutes “freedom” in the US, and it seems US officials might have slightly more pressing matters to attend to on the home front than World Cup armbands.

Indeed, as this year’s World Cup host, Qatar has come under intense US and European fire on the issue of gay rights as well as migrant worker exploitation (not to mention the violation of the apparent human right to drink beer in sports stadiums). After all, Orientalism dies hard – and what better backdrop for the release of pent-up Western chauvinism than a football tournament in a bona fide Middle Eastern desert, enduring Orientalist symbol of Arab backwardness and resistance to progress?

The point of calling out Western criticisms is not to contend, crassly, that the Gulf emirate is categorically beyond reproach. It is, rather, to highlight the massive hypocrisy that is on display when countries that continue to commit more human rights abuses than Qatar could ever dream of decide to unilaterally award themselves the moral high ground.

It’s kind of like when the US rails against oppressive government behaviour in Cuba. The critiques are not necessarily invalid in and of themselves, but they command zero moral traction given the US’s superior track record of oppression, including its barbarous 60-year embargo of the island and its operation of an illegal prison and torture centre on occupied Cuban territory in Guantánamo Bay.

As the old saying goes, look in the mirror before you judge others.

Navid Zarrinnal, a scholar of Iran and the Middle East at Stanford University in California, remarked in an email to me that “Western supremacist attitudes and cultural imperialism” are being showcased at the World Cup – “disguised”, as usual, as “advocacy for human rights”. This arrangement naturally makes it difficult for Western states and NGOs to “prioritise self-reflection over their saviour anxieties”.

The people who are “parachuting into Qatar to lecture them about gay rights”, Zarrinnal said, are ignorant of the long history of homosexuality in the Arab world, which is “reflected in their poetry, visual art, and social history”. He continued on to describe how Western powers, now with their footballers at the vanguard, have instead reduced the panorama to a simplistic narrative of repression – salvation from which depends entirely on whether Arab homosexuality can be “molded into the same LGBTQ identities they have in their own countries”.

On the eve of the World Cup kickoff, Gianni Infantino, the Italian president of FIFA, delivered a rambling speech, which – a couple of patronising detours into Orientalism notwithstanding – took some valid hits at Western hypocrisy: “I think for what we Europeans have been doing in the last 3,000 years, around the world, we should be apologising for the next 3,000 years before starting to give moral lessons to people”.

He also slammed the selective denunciation of migrant worker abuse in Qatar when Western firms had long been content to profit from labour conditions in the country – which he contended had improved considerably in the context of the World Cup – and when Europe’s own lethally xenophobic anti-migration policy is to blame for thousands upon thousands of refugee deaths in the Mediterranean Sea and beyond. (Of course, European racism and xenophobia can be selectively curtailed in the interest of football; there weren’t many Brits complaining when 21-year-old Nigerian British footballer Bukayo Saka scored two of the goals in England’s first World Cup match this year.)

As for what the US has been doing around the world for much less than 3,000 years, this includes killing Native Americans, enslaving Black people, and serving as the architect of a global capitalist system predicated on vast inequality, the mass trampling of rights, and the subjugation of workers.

Even as the US violates everyone else’s borders to sow military and economic havoc, it furiously fortifies its own – a practice that, as in Europe, has rendered US-bound migration a frequently deadly undertaking. Not that life is a peach for those who successfully cross the border, many of whom perform services crucial to the US economy and yet are drastically underpaid, demonised by society, and utilised as political scapegoats.

In other words, it’s all pretty “concerning”, to borrow Blinken’s term. Just as it’s concerning that a country that has bombed countless human beings to bits feels qualified to sermonise on any matter relating to human rights.

Writing recently at the Guardian, David Wearing – a University of Sussex lecturer and the author of AngloArabia: Why Gulf Wealth Matters to Britain – observes that much of the discourse surrounding the current World Cup is driven by “racist caricatures” pitting an enlightened West against an irreparably uncivilised Middle East. This “self-serving mythology”, Wearing notes, obscures regional history and legitimises Western interference (civilised bombing, anyone?) – it also “externalises and circumscribes the blame for human rights abuses… while preserving a narcissistic sense of western innocence”.

Wearing concludes that the 2022 World Cup, far from being a phenomenon “alien” to the West, is in fact a “representative example of the world that western power built”. And as concerned parties remain up in arms over the perceived contravention of Western values at the tournament, it’s high time to bust out that proverbial mirror.