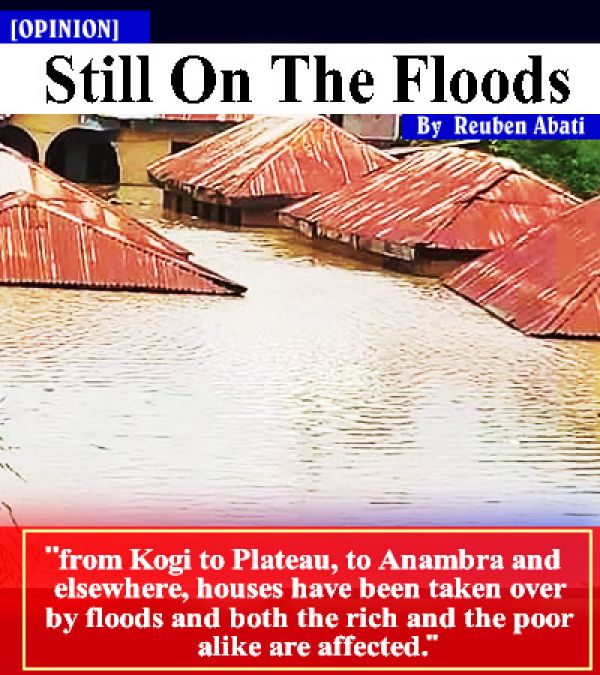 Since I wrote the piece titled “The Floods This Time’ on this same page (ThisDay, Tuesday, October 11, 2022), the situation with the floods have worsened. The reports indicate that over 600 persons have died, about 2 million persons have been displaced. The most shocking report for me was the declaration by some newspapers that former President Goodluck Jonathan’s house in Bayelsa is also heavily flooded and that communities including Otuoke where he hails from have been submerged.  One cheeky editor had the temerity to cast the headline that President Goodluck Jonathan is now an Internally Displaced Person (IDP). Editors and their funny attempts to attract the reader’s attention. But I get the point being made, that floods are no respecters of persons: from Kogi to Plateau, to Anambra and elsewhere, houses have been taken over by floods and both the rich and the poor alike are affected.

In the face of natural disaster, or state failure, both the rich and the poor pay the price. We have been told that food inflation would be higher by December, farms having been destroyed by the floods and the harvest season completely turned adrift. The poor and the rich go to the same market. We share a common humanity. So bad is the flood crisis this year that it has attracted international attention including a message from King Charles III of England who has written to express concern and solidarity with the people and government of Nigeria over the loss of lives due to “devastating floods”. Thank you, your Majesty.

But it is painful that we have not seen as much concern from Nigerian leaders. It took the candidate of the Labour Party, Mr Peter Obi suspending his campaigns for the 2023 elections for other political parties to realize that this was indeed a serious issue. In Agege, the other day, a man was swept away by the flood. It is the same story of woe and tragedy in Bayelsa, Anambra, Plateau, Kogi and elsewhere. In Azikoro Government Cemetery in Bayelsa state, corpses were washed out of their resting places. The terrible disaster that is looming is imaginable: health challenges, loss of assets, destruction of properties, a public health crisis. The Nigeria Hydrological Services Agency and the Nigeria Meteorological Agency (NiMET) claim that we have not yet seen the worst. In Lagos state, people living in low-lying areas have been advised to move upland. Will the people listen? We never seem to listen because being Nigerians, we don’t trust persons who work in government. We tend to believe the worst about officialdom.

The truth nonetheless, is that in the face of all of this, not much effort has been put in by the National Emergency Management Agency, the government or philanthropists. In addition to the attention that Mr. Peter Obi, the media and others have drawn to the problem, we have seen some Governors travelling in canoes, donating relief materials and taking pictures.  The Presidential candidate of the People’s Democratic Party (PDP) is also scheduled to tour some of the flood-ravaged states. The APC and LP Presidential candidates have donated money. Friends of Senator Seriake Dickson have done so too. The point must be made though that this is beyond politics. Nobody should exploit the people’s plight for political advantages.  In 2012, the Jonathan administration set up a Flood Relief Committee led by Alhaji Aliko Dangote and Olisa Agbakoba, SAN. At the time, government provided about N17.6 billion as relief funds to assist states and communities across the country. The Federal Government today needs to intervene even more robustly. And by the way, I omitted an important detail.  Just yesterday, we got to hear that “President Muhammadu Buhari has directed the Minister of Water Resources to lead and coordinate with the ministries of environment and transportation as well as state governments to develop a comprehensive plan of action for preventing flood disaster in Nigeria.”  The President expects a report in 90 days!

Those who want to lead Nigeria may be enjoying the photo-ops that the flood tragedy offers, but as part of the on-going campaigns, we would need concrete ideas about what each candidate intends to do about climate change, the rainfall that causes floods, the dams that flood the low-lying plains, including the Lagdo Dam in Cameroon. Otherwise, by this time, next year, we would be back to square one complaining about the same problems in typical Nigeria fashion. In 90 days from now, we would probably begin to have an idea.