[OPINION] 2023: Peace Accord and The Violent Campaigners - Reuben Abati 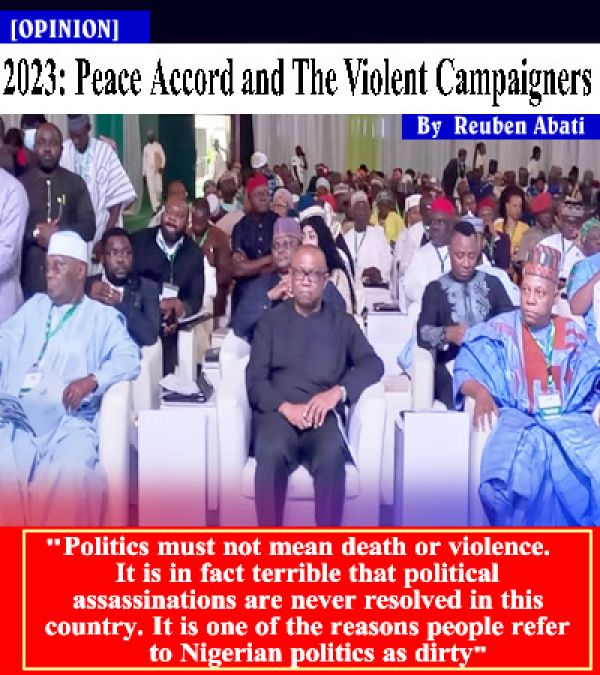 On September 29, the National Peace committee led by General Abdusalami Abukakar and the Bishop of Sokoto Diocese, Bishop Matthew Hassan Kukah organized an event in Abuja where Presidential candidates of the political parties for the 2023 general elections signed an accord to give peace a chance, avoid violence and respect the rule of law and order. It was meant to be the first in a series of peace-building efforts by the National Peace Committee which this year expanded its fold, by involving the participation of key figures in corporate Nigeria including Alhaji Aliko Dangote and Mr. Femi Otedola, and other leaders such as the Sultan of Sokoto, John Cardinal Onaiyekan, Mr. Sam Amuka Pemu and Justice Roseline Ukeje. Founded in 2014, the National Peace Committee has had a strong track record of reminding political gladiators that Nigerian elections or leadership contests are not a do or die phenomena, and should not be so. This is a useful message and mission statement.

It is important, without doubt, that elections are peaceful and that politicians behave decently. In retirement, General Abdusalami Abubakar has dedicated himself to preaching about peace and stability. He offers good service in that regard. He has a good associate in Bishop Matthew Hassan Kukah, who in every sense, is also a patriot. The inclusion of others over the years is a welcome development, to remind everyone that elections must not result in chaos. The stakes in 2023 appear to be quite high, much higher than in previous elections, and these may well prove to be for Nigerians like no other elections since the return to civilian rule in 1999.

It is unfortunate however and most disturbing that the politicians who signed a Peace Accord in September 2022, and their surrogates as well, are disowning the same accord by conduct, and by their utterances.  Since September when the Independent National Electoral Commission blew the whistle that campaigns could begin, in fact before then, and thereafter, there have been reports of violence, intolerance, hate speech, foul language, vitriol, abuse, harassment and general bad faith. The candidate of the Labour party, Mr Peter Obi has had to raise questions about attacks on his supporters in Enugu, Nasarawa, Ebonyi and Lagos states. In the first week of September, gunmen threatened Peter Obi’s supporters in Enugu.  The supporters were holding a meeting in Awga community. Four unknown gunmen suddenly showed up around 5.00 pm and opened fire on Obi’s supporters. They shot in the air, and disrupted an on-going meeting.  A day earlier some members of the same party were also attacked in Nenwe, in Aniniri LGA in the same Enugu State.

About a week later, Obi’s supporters were again attacked in Ebonyi state. This time, the Nigeria Police was identified as the assailants.  In a statement, the Labour Party’s National Publicity Secretary accused the ruling party, the All Progressives Congress, APC, of using the police to promote the politics of violence. To add to the evidence, in Abakaliki, Obi’s supporters were said to have been tear-gassed by the police. In October, Obi’s supporters, known as “flag boys” were also brutalized in Lagos. The flag boys were accused of carrying Peter Obi’s flags around Oshodi in Lagos, and they got beaten by thugs working for another political party. They were in fact lucky. There was an attempt to burn them alive!  In Nasarawa state, Joshua Alamu  who took part in a solidarity sensitization campaign for Peter obi was also attacked. He eneded up in the hospital. The Labour Party again issued a statement asking for protection.

But the Labour party is not alone. When the People’s Democratic Party (PDP)) held its rally recently in Kaduna, the main issue was that the party’s supporters were attacked, and injured. Thugs reportedly invaded the venue of the rally and started beating people up. Both the PDP Presidential candidate Atiku Abubakar and former Senate President, Senator Bukola Saraki condemned the incident. The attackers wielded swords and machetes! Before that, Senator Ifeanyi Ubah representing Anambra South in the National Assembly was also ambushed and attacked at Enugwu-Ukwu in Njikoka LGA of Anambra State.  He is seeking a Second term in office. We have also heard in this reason, reports of verbal violence, and threats by politicians. In many states of the Federation, opposition parties are not allowed to put up posters or billboards and when they do, the posters are destroyed. In Lagos State, the candidate of the PDP has had to protest that he is being targeted by the ruling APC and its henchmen. Last Saturday, the convoy of the PDP Gubernatorial candidate, Olajide Adediran and his Deputy, Funke Akindele was attacked at the Ikoga Junction area of Badagry Local Government area of Lagos State.  Some journalists and other members of the entourage sustained injuries. IN many states, the state-owned broadcast media behave m0re or less like campaign units of the ruling party in utter violation of the National Broadcasting Code.

The growing spate of violence is a bad comment on the letter and spirit of the peace accord signed on September 19 by leaders of the political parties. It shows that our political leaders have not learnt any lessons and would stop at nothing, no matter how heinous to achieve their objectives. We have gone through this route before. Between 1999 and 2007, many politicians were killed in the lead up to election seasons. The assassinations remain unresolved, including the brutal assassination of Chief Bola Ige, a sitting Attorney General of the Federation in December 2001.  Others include Marshall Harry, chairman of the Rivers State ANPP, in 2003, Engr Funsho Williams in July 2006, Dr. Ayo Daramola, PDP Governorship aspirant in Ekiti in August 2006, Dele Arojo in Lagos, 2002, Ogbonnaya Uche, killed in his home in Owerri in 2003, Chief Aminasaoari Dikibo in October 2004, Abigail and Barnabas Igwe, in September 2002, Dipo Dina in January 2010, Odunayo Olagbaju, in December Ile Ife in 2001 and Chukwudi Okafor in Umuawukwu, Awka South, Anambra in 2009.  to name a few. Nobody deserves to die for seeking to serve his or her country or to participate in the democratic process.

Politics must not mean death or violence. It is in fact terrible that political assassinations are never resolved in this country. It is one of the reasons people refer to Nigerian politics as dirty, and why some of the best persons in society who could make a difference stay away from the political arena. The laws of the land, including the Electoral Act criminalize violence before, during and after elections, in clear affirmation that politicians and their agents must not take the law into their hands, but the reality is that Nigerian politicians think that politics is a do-or-die affair. Hence, they talk violently. They behave violently. They surround themselves with violent assistants, otherwise known as able-bodied men or thugs. Some of the thugs even bear fanciful official titles and wield such enormous influence that would be considered obscene in civilized societies. They kill. They maim. They and their masters have turned Nigerian politics into a criminal enterprise. Politicians need to know that the recruitment of these armed assistants is a double-edged sword. They could turn against you and become your source of problems. Don’t give them drugs or dangerous weapons. It turns their heads.

The big threat as we prepare for the 2023 elections, is beyond ethnicity and religion, this criminality, that is the desperation of the political profiteers and their agents, the thinking that politics is a zero-sum game. The evidence is again writ large in the language of the politicians and the conduct of their supporters.  At the signing of the Peace Accord, the Inspector General of Police said openly that the police are ready to keep the peace and protect law and order. It is about six months to the elections and the police and other security agencies are failing the people, and the state. It is not too early to call politicians who are promoting violence directly or vicariously to order. The security agencies know the thugs, their masters and sponsors. To look the other way for selfish gain as is customary during election seasons would amount to using the state and its apparatuses to aid and abet crime. Security agents must stay away from partisan politics.  They must maintain complete neutrality otherwise 2023 could turn out as yet another blow-out moment in Nigerian history. It should be a turning point for good and that I assume, is the expectation of all who have the interest of this country at heart. The security agencies must become pro-active and take preventive measures. They must not behave like lawyers, thugs, and associates of politicians who see election season as “chop-time”.