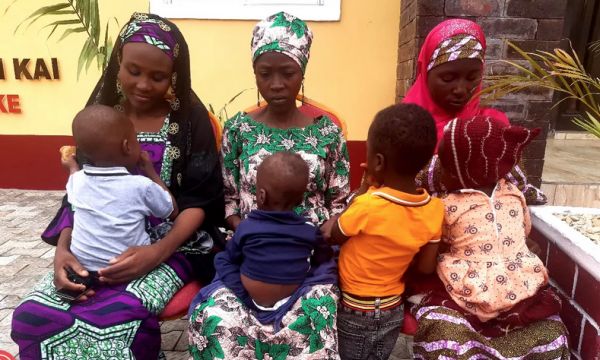 Pogu, who was rescued with her four children, gave birth to a set of twins four months ago.

Speaking on the recent development, Zagazola, a publication focused on counter-insurgency operations in the Lake Chad region, said her twins were in an unhealthy condition when she was rescued.

Her rescue, according to TheCable, was achieved by troops of the Nigerian Army, backed by a column of the Civilian Joint Task Force (CJTF) when they stormed the enclave of Jama’at Ahl as-Sunnah lid-Da’wah wa’l-Jihad, a terrorist group in Bama Local Government Area, Borno State.

According to intelligence sources, the troops engaged and overwhelmed the insurgents, neutralising scores of terrorists in the process, while several others escaped with fatal gunshot wounds.

“In the course of the encounter, troops successfully rescued Yana Pogu, a Chibok girl who was number 19 on the missing girl’s list along with her four children,” the source said.

“She was found with a four-month-old set of twins in a very unhealthy condition.
“Some of the fleeing insurgents also attempted to ambush their troops but while acting on the intelligence, the troops responded swiftly with aggressive fire powers, forcing them to flee.

“More women were rescued after the encounter. They are transferred to the 21 Armoured Brigade, Bama, for medical attention.
Over 200 students were kidnapped by insurgents from the Government Girls’ Secondary School (GGSS) in the Chibok area of Borno State, on April 14, 2014.
Meanwhile, several of the girls have been rescued, but dozens are still reported to be in captivity.

On July 26, 2022 troops of the Nigerian Army reportedly rescued two of the Chibok schoolgirls abducted by insurgents in 2014
It had been reported that troops of the 202 Battalion and 82 Division Task Force Battalion rescued two of the students with two children on June 16.
Also, on June 29, the Nigerian Army rescued Ruth Bitrus, another Chibok schoolgirl, with a child, from an insurgents’ hideout in Bama Local Government Area of Borno State.