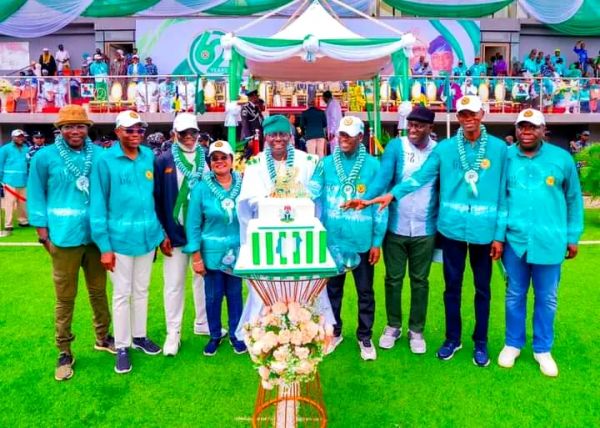 Gov. Babajide Sanwo-Olu of Lagos State on Saturday said even after 62 years of independence, Nigeria is still striving to attain freedom from terrorism and poverty.

The parade held at the Mobolaji Johnson Arena, Onikan, was organised by the Lagos State Ministry of Home Affairs.

He said that the country was still seeking freedom from the disastrous impact of climate change and from moral decline.

”Sixty-two years ago, it was freedom from colonial rule, which we are celebrating; today the striving is to attain freedom from terrorism, poverty, the disastrous impact of climate change, and from moral decline.

”More than ever before, we owe it a duty to the younger generations to collectively develop a lasting solutions to our challenges,” the governor said.

He said it was in Lagos that the story of Nigeria’s independence unfolded, where the Union Jack went down and the Green-White-Green took its place, carrying the hopes and dreams of millions of black people in Nigeria and beyond.

Sanwo-Olu acknowledged the place of Lagos State in the unfolding greatness of Nigeria, as the state had always been a pacesetter.

He said that many creative initiatives that originated in Lagos had become templates for other states and even the Federal Government, in the collective drive to accelerate development and bring prosperity to all parts of the country.

According to him, it was in Lagos that the new, post-Independent Government emerged and began the historic task of full self-government.

”Since then, Lagos has grown in leaps and bounds, in all ramifications.

”But all through the momentous changes, from long before Independence, until this moment, one thing has not changed, we are still the melting pot that we have always been, for people of all faiths, tongues, and socio-economic classes.

”Welcoming all and sundry and giving them a chance to build fortunes and destinies out of hard work and perseverance, forging mini-Nigeria out of the diversity that we are constantly presented with.

”Today, October 1, offers yet another opportunity to rededicate ourselves to the march toward the ”Greater Lagos” of our collective desire.

”We remain committed to making Lagos State a 21st-century economy, a Smart City State that is prosperous and globally competitive. We have what it takes to drive this mandate,” he said.

The governor said that the state would continue to be the pacesetter of Nigeria in infrastructural development, industrialisation, culture and hospitality, technology and innovation.

He said that the government would build a state that worked for all, in which there would be equal opportunity for everyone to pursue their legitimate aspirations.

”As your representatives and custodians of your mandate, we shall keep our hands on the plough and remain focused on our goal of making life more comfortable, healthier and wealthier for our people.

”In closing, I wish to pay tribute to all of our heroes, past and present, those who have laboured and sacrificed, over the decades, and all who continue to labour and sacrifice today, to guarantee freedoms for all of us.

”I wish all Lagosians a Happy Nigerian 62nd Independence Anniversary. May the labour of our heroes past and present never be in vain. God bless Lagos State, God bless the Federal Republic of Nigeria,” Sanwo-Olu said.