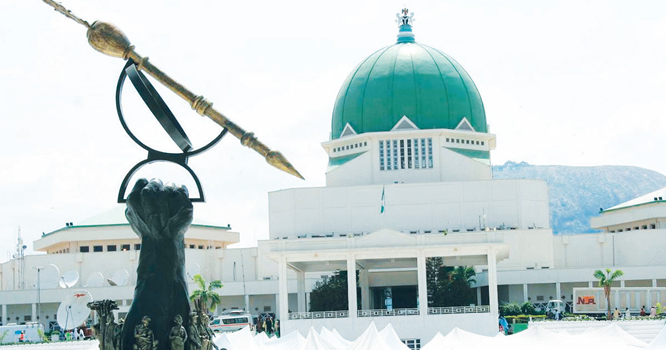 There are indications that the national leadership of the All Progressives Congress (APC) has shortlisted former governors of Nasarawa, Abia and Kebbi states – Abdullahi Adamu, Orji Uzor Kalu and Adamu Aliero – as well as the senator representing Ondo North Senatorial District, Prof. Ajayi Boroffice, for the remaining principal office positions due to the ruling party in the Senate.

A source, who is privy to the arrangement, told New Telegraph yesterday that Adamu has been tipped for the position of Majority Leader, while Kalu, Boroffice and Aliero have been shortlisted as Deputy Majority Leader, Chief Whip and Deputy Chief Whip, respectively.
The source revealed that the choice of the quartet was arrived at, following a zoning process adopted by the APC National Working Committee (NWC) and that list to that effect, which will be forwarded to the Office of the Senate President this week, is expected to be adopted on July 2, when the Senate resumes from its two-week break.

But another source within the APC told our correspondent that the party is yet to arrive at a final decision on the position of Majority Leader.

He said though most members of the APC NWC are disposed to South-East occupying the position through Kalu, a final decision would be taken by the time they meet tomorrow.
The party’s National Chairman, Adams Oshiomhole, is said to be out of the country, but is expected back before today or tomorrow.

Senators Ahmed Lawan (North-East) and Ovie Omo-Agege (South-South) have earlier emerged as Senate President and Senate Deputy President, respectively, during the inauguration of the 9th Senate on Tuesday last week. The two are the party’s preferred choices for the positions.

It was learnt that the ruling party shunned former Governors Ibikunle Amosun (Ogun) and Rochas Okorocha (Imo) who indicated interest in the Senate leadership.

New Telegraph learnt that the zoning process through which the party arrived at the three former governors, who interestingly served within the same period (1999-2007) under the platform of the Peoples Democratic Party (PDP), first, involved ceding of the four positions – Majority Leader to North Central, Deputy Majority Leader to South-East, Chief Whip to South-West and Deputy Chief Whip to North-West.

The second step involved meeting of party zonal leaders in the respective zones to decide on who among senators from their areas will get the positions.

The source, however, disclosed that the second step was not adopted in the case of the South-East as the national leadership decided for the zone.

“The APC national leadership zoned the four offices to the respective four zones and after that, their zonal leaders met and decided on who among the senators will get the positions, with the exception of the South-East to avoid the process being truncated because Rochas Okorocha showed interest for the position of Deputy Majority Leader,” one of the sources said.

Besides adopting zoning to ensure that all the six geopolitical zones were accommodated in the sharing of principal offices in the Senate, New Telegraph was informed by an APC senator, who preferred to speak on the condition of anonymity that the party’s hierarchy resolved to compensate loyalists, who respected party decisions and supported preferred candidates at the Assembly elections and thereby frustrated the PDP from taking any slot in the majority leadership of the two chambers.

“It is payback time. The APC is set to reward those loyal party members who refused all temptations to rock the boat for the party during the inauguration of the National Assembly on Tuesday last week because it will act as an encouragement to party members in future elections.
“So, those National Assembly members who sacrificed their personal ambitions to run for specific offices are definitely going to be rewarded in one way or another. If they had gone ahead to contest for the position of Senate Deputy, do you think that Omo-Agege, who is the party’s candidate would have won?

“In fact, the 2015 scenario was almost repeating itself, but for the last minute pressure, which made people like Orji Uzor Kalu, Kabiru Gaya and Ajayi Boroffice to step down. You saw what PDP planned to do, but luckily, there was unity of purpose among the APC senators-elect and that was the saving grace for the party,” the ranking senator told New Telegraph.

Meanwhile, the source, who spoke on the zoning arrangement, revealed that Adamu was considered for the position of Majority Leader because he not only shelved his interest in the position of Senate President, when the party opted for the North-East, but has been a strong supporter of President Muhammadu Buhari.

“You will recall that the former governor of Nasarawa State (Adamu), who has been in the Senate since 2007, was at a time the chairman of Northern Senators Caucus as well as leader of pro-Buhari senators, which pitted him against the leadership of the 8th Senate under Bukola Saraki,” the source added.

For Kalu, the source said he was naturally going to be the choice of the South-East being the most ranking lawmaker of APC extraction in the Red Chamber from the zone.

The former Abia State governor was a member of the House of Representatives in the aborted Third Republic. He also heeded to the party’s directive to drop his ambition for Senate President and Senate Deputy President to support the preferred candidates.
Kalu had insisted on running against Omo-Agege even up to the eve of the inauguration of the Senate, but stepped down in the interest of the party.

For the position of     Chief Whip that was zoned to the South-West, New Telegraph learnt that seven senators from the zone were screened. They are wife of APC National Leader, Asiwaju Bola Tinubu, Oluremi, and Solomon Adeola (Lagos); Olubunmi Adetunbi and Opeyemi Bamidele (Ekiti), Teslim Folarin (a former Senate Leader, Oyo), Lekan Mustapha (Ogun) and Boroffice (Ondo).

The two APC senators from Osun State – Basiru Surajudeen and Adeyemi Oriolowo – were not considered because they are first-timers in the Senate, while the immediate past governor of Ogun State, Amosun (Ogun Central), a second-timer, was overlooked as he is presently under suspension over alleged anti-party activities during the last elections.

It was further gathered that the contest was between Senators Tinubu and Boroffice, who both showed interest in the position of Senate Deputy President before backing out.

The Ondo senator emerged tops because APC leaders in the South-West argued that it would be unfair for Lagos Central (Oluremi Tinubu’s senatorial district), which produced the Speaker of House of Representatives – Rt. Hon. Femi Gbajabiamila – to also take the position of Senate Chief Whip.

On the part of Aliero, who was shortlisted as Deputy Chief Whip, the source said he was considered on his strength as two-term governor, two-term senator and former minister.
This is even as it was learnt that some leaders of the party are also considering Senator Kabiru Gaya, representing Kano South, for the position.

Gaya, a former governor of Kano State, had insisted on contesting for the office of Deputy Senate President against Omo-Agege, but shelved this ambition shortly before the inauguration of the 9th Senate.

Besides the principal office positions, New Telegraph also learnt that the ruling party has tipped Senator Adeola (Lagos West) for the chairmanship of the Senate Committee on Appropriations.