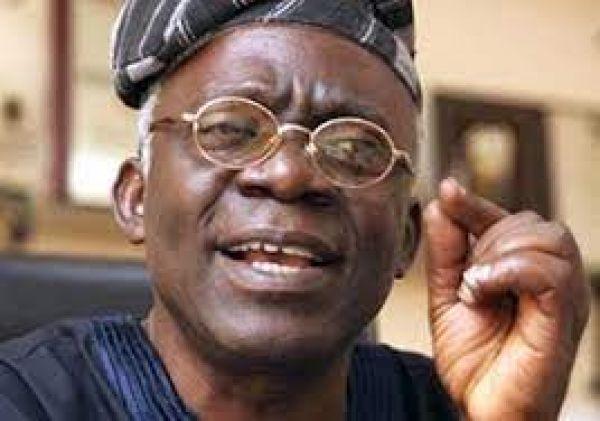 A human rights lawyer, Femi Falana, SAN, at an event organised by the Socio-Economic Rights and Accountability Projects, monitored by SEGUN ADEWOLE, laments the injustice done to the Niger Delta region and the Federal Government’s decision to place the Niger Delta Development Commission under the Ministry of the Niger Delta

Human rights lawyer, Femi Falana, has alleged that about N17bn allocated to stop oil theft has been  diverted

Falana, while delivering his goodwill message in Lagos State Thursday,  also stated that the Ministry of Niger Delta ought to be under the NDDC, and not the other way around.

He spoke an event organised by SERAP during the Report Presentation and Interactive Session, titled, “Promoting Transparency and Accountability in the Use of Public Funds in the Niger Delta region of Nigeria,”

“The NDDC is older than the Ministry of Niger Delta. So, if one should be under, it should be the other way around. But what has happened since 2015? You are either told that we are investigating fraud in the NDDC, or ‘Oh, we have set up an audit committee to investigate allegations of fraud.

“That committee submitted its report, but no white paper has been issued until now. We are only told, Oh, thousands of jobs have been abandoned in the Niger Delta.

“By the time the report came out, many of the contractors thought they were going to be arrested. So, some of them moved to abandoned sites so as not to be prosecuted by the EFCC. But when they discovered that the government was not serious about it, everybody went back to their former positions, since they knew nothing would happen.

“Let us, therefore, challenge the office of the attorney general to impress on the president that it is discriminatory, unfair, and unjust not to reconstitute the Niger Delta Development Commission.”

According to the human rights lawyer, the National Assembly, state governments in the Niger Delta and the Niger Delta Ministry all have questions about funds allocated to the region.

Falana said, “All the contracts awarded either by the sole administrator or interim management are illegal because sole administratorship is unknown to the NDDC Act. We are, therefore, calling on the government without any further delay to inaugurate the board of the NDDC.

“For the national assembly, you carried out a probe recently where somebody was collapsing. How will you not collapse if you cannot account for billions of Naira?

“So, we must ask for explanations. We must demand explanations. If you identify any abandoned projects, please send information to SERAP. I can assure you that I have been requested by SERAP to take up any matter going forward. We are going to court locally and internationally.”

Demanding better living conditions in the Niger Delta, Falana said, “I also want to challenge you, people of the Niger Delta. You must also take up the oil company very seriously. I cannot see any reason why oil workers and management staff are living in Nigeria as if they are in Nigeria and Britain, yet the oil-producing communities live in darkness, squalor, poverty, and want. These should stop because they are making billions of dollars from your region.

“For that reason, we will stop the humiliation of our people. Every community in the Niger Delta must have functional electricity.”

He lamented that oil theft has continued despite the N17bn government spent on technology to track the movement of crude oil.

He said, “The other important point is that we must take advantage of this forum to expose the government for the claim that they do not know those who are stealing oil in the Niger Delta. I hope the government people are going to listen well. For the first time in 50 years, we are unable to meet our oil quota in a very shameful manner. Our quota is 1.8 million barrels of crude oil per day.

“Today, the government claims we are producing only 900,000 barrels. What that means is that at 100 dollars per barrel, it’s about 99 million dollars per day. We cannot be producing oil for thieves. No resourceful government in the world today can say we don’t know why thieves tamper with computers because technology has gone beyond this level. We have 36 oil terminals; only 20 have meters.

“So, for the remaining 16 deliberately, we don’t know how much oil is produced. We don’t know how much oil is taken out of those areas. So, we must insist that the government, as a matter of urgency, acquire metres for all the oil terminals. I don’t want to go into other areas where we are being deceived, because we are told now that we have fuel imported into Nigeria and being smuggled into western African countries. Therefore, we are spending, according to the government, $4 trillion per annum, which is going to increase to $6.5tn per annum.

“So, you have money for smugglers, but you have no money for education, and our students are at home.

“So, I am, therefore, also telling you that it is a lie. They say they cannot track smuggling. It’s a lie. No government in the world can say that. I did say this publicly last week, and I have not been challenged, that on the 8th of August 2018, the Federal Executive Council approved N17bn for the acquisition of software to track ships that are loading crude oil in Nigeria and to monitor where the crude oil is being taken to, and also to track tankers loading fuel anywhere in Nigeria and taking them wherever.

“That money was criminally diverted. And that is why they will tell you about the criminals that are smuggling fuel out of Nigeria. You don’t pass through the bush when you smuggle. You go by tanker. The Comptroller General of the Customs, Col. Hameed Ali, has gone to the national assembly to say that the Nigerian National Petroleum Company Limited is lying and that you cannot see the volume of fuel we are talking about coming out of Nigeria. Nobody has seriously challenged him. The Minister of State for Niger Delta, Mr Timipre Silva, has also said publicly and to the media that the fuel importation scams are a criminal enterprise.