A German nudist has drawn applause after he gave chase to a wild boar that picked up the bag containing his laptop while he was sunbathing naked at the Teufelssee in West Berlin.

The photographer who captured the drama, Adele Landauer, shared it on Facebook with the permission of the naked man.

In the photos, the naked man is seen chasing the boar and her two piglets while fellow sunbathers looked on in amusement.

“Nature strikes back,” wrote Adele Landauer, a personal coach, on Facebook. “I showed the man the photos, he laughed heartily and gave me permission to make them public.”

The man was sunbathing naked at the Teufelssee in West Berlin, a popular and perfectly legal practice in the German capital as part of what is known as FKK, or Freikörperkultur (free body culture).

The wild boar had apparently spotted a pizza being eaten by other bathers so it seized a yellow bag containing the man’s laptop, probably believing it to contain food.

When the man noticed what was going on, he chased the animal into the undergrowth.

“Because the bag contained his laptop, he gave it his all, even though he was in his birthday suit,” explained Landauer. 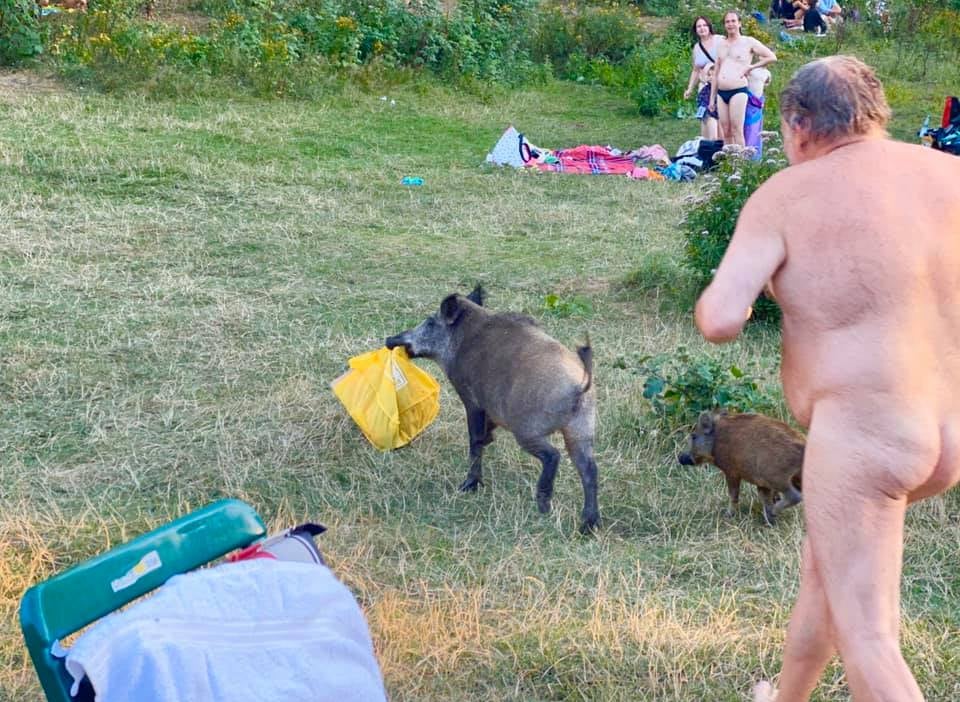 The boar’s flight was slowed by a cardboard box in its path. The man clapped his hands and hit the ground with the stick, prompting the boar to drop the laptop and the man took his bag back.

“When he returned from the forest, everyone applauded him.”

“We urge people not to panic in such a case,” he said. “We have so far had no injuries – the animals are quite used to humans.”

LET'S HAVE YOUR COMMENTS

There is no constitutional provision for Tinubu, and his likes are a threat to democracy — Obaseki

US places Atiku, family under close watch over alleged fraud

Abule Ado explosion: Forensic investigation reveals that govt lied on its cause - Here’s what actually happened

Farmers Charged On Contributing To Nigeria’s Growth Through Agric Export

Osinbajo: Nigeria in One of Worst Health, Economic Crises

My ally, my partner in struggle - Tinubu praises Oluremi on her birthday

I’m still studying results; will announce my next move - Ize-Iyamu

U.S. sets record with over one million COVID-19 tests in a day