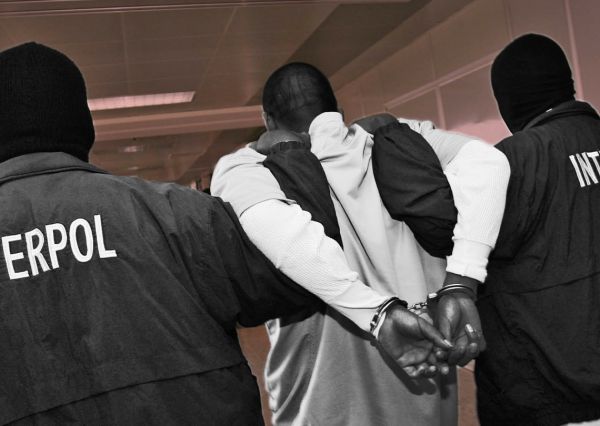 Two Nigerians suspected to be cybercrime kingpins have been arrested by Interpol officers in South Africa.

According to South Africa’s TimeLive, the suspects were arrested on Wednesday during early morning raids with the collaborative efforts of the Directorate for Priority Crime Investigation (DPCI) known as Hawks in the Pretoria East suburb of Equestria.

The report did not disclose the identities of the suspects but said they were aged 39 and 42.

The suspects are alleged to be linked to Nigerian organised crime syndicates operating sophisticated cybercrime networks.

The Hawks spokesperson, Katlego Mogale, said “The search and seizure operation by the joint team recovered electronic equipment, including laptops and phones, thousands of rand in cash, as well as an unlicensed firearm, in Wapadrand and Sunnyside.

“The two foreign nationals are alleged to be part of a cult known as the ‘Air Lords’ who are said to be rivals of the ‘Black Axe’ movement. The suspects will be charged, detained and extradited by Interpol.

“The suspects will be linked to online scams being investigated by the 419 provincial task team. This arrest is but one of several simultaneous happening in other countries tracing the suspects involved in online scams such as romance, investments, Bitcoin, employment and related advance fee fraud.”

The suspects will be charged to court on charges bordering on conspiracy to wire fraud, access device fraud, conspiracy to commit fraud and money laundering schemes related to contraventions of the Prevention of Organised Crime Act.

It was revealed that one suspect will be charged with possession of an unlicensed firearm and ammunition.

Sources said they were apprehended as part of a multidisciplinary operation involving years of investigation and co-operation between local and international law enforcement agencies.

The arrests are the latest in a crackdown on Nigerian organised crime groups, which began with raids in Cape Town in November last year when the Black Axe or Neo Black Movement of Africa’s Cape Town leadership were arrested in a huge operation.

They and other alleged Black Axe members and Nigerian organised crime members arrested since then face extradition to the United States on fraud charges relating to huge business e-mail compromise scams and romance scams worth hundreds of millions of rand.