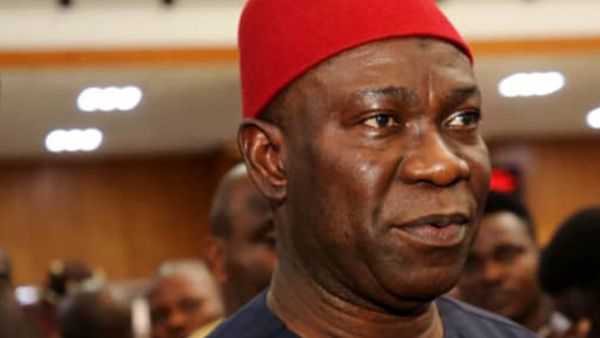 Isaac Okah, the first runner-up in the Peoples Democratic Party (PDP) senatorial primary held in Enugu west in 2018, says he is not dead.

The primary had produced Ike Ekweremadu, the former deputy senate president, who later won the Enugu west senatorial seat in the 2019 election.

However, Ekweremadu is currently in custody in the UK due to charges bordering on conspiracy to arrange/facilitate the travel of another person with a view to exploitation, namely organ harvesting.

Following the development, Ogochukwu Onyema, a lawyer and second runner-up in the aforementioned election, sought a court order to declare Ekweremadu’s seat in the senate vacant.

Onyema had claimed that Isaac Okah, the first runner-up, is dead, adding that he’s the available candidate qualified to take the seat when it is declared vacant.

Reacting to the development on Friday, Okah said Onyema lied on oath.

Okah distanced himself from the suit seeking for Ekweremadu’s seat to be declared vacant, adding that he would not seek to benefit from the “misfortunes of his kinsman”.

“Sir O.A.U. Onyema equally seeks the order of the court commanding and mandating the Independent National Electoral Commission (INEC) and its chairman, Prof. Mahmood Yakubu, to withdraw or revoke, as the case may be, the certificate of return earlier issued to the 3rd defendant (Ekweremadu) and issue a fresh certificate of return to him as the only available runner-up that can validly be nominated as senator Ekweremadu’s replacement,” he said.

“It is imperative to state that I polled 84 votes at the 2nd October 2018 PDP primary election for the Enugu West Senatorial to place second behind Senator Ike Ekweremadu, who polled 690 votes to emerge winner, while O.A.U. Onyema mustered 61 votes to place third.

“However, to further his case, O.A.U. lied on oath by deposing to an affidavit that the 1st runner-up, being my humble self, is dead, hence purportedly leaving him as the only available runner-up.

“I wish to unequivocally clarify that I, Mr. Isaac Okah, a retired director in the federal civil service, is alive, well, and running my private business.

“It is a shame that naked and unbridled ambition has pushed O.A.U Onyema into the sacrilege of wishing his fellow man dead.

“It is equally a shame that a lawyer of several years experience, who aspires to the senate, has no firm grasp of the position of the 1999 constitution on the grounds on which a national assembly member’s seat could be declared vacant and is ignorant of the provisions of Section 76 of the constitution, which explicitly mandates the INEC to conduct a bye-election within 30 days to fill any vacancy in the federal legislature.

“I totally condemn and dissociate myself from his wicked lawsuit, which has no bearing whatsoever with Nigerian laws, conventions and practices of the national assembly of Nigeria, and our humanity and culture as Ndigbo.

“However, since an elder like O.A.U. Onyema believes he could only make it to the senate by lying to benefit from the misfortunes of his kinsman and wishing another man dead, I wish him well and leave him entirely to the verdict of God, our ancestors, and history.”

Ekweremadu and Beatrice, his wife, were arrested by London Metropolitan Police in June and appeared before a magistrate court in July.

Ekweremadu and his wife have been accused of arranging a kidney donor for Sonia, their daughter, who is said to be suffering from focal segmental glomerulosclerosis (FSGS) nephrotic syndrome, a rare kidney disease