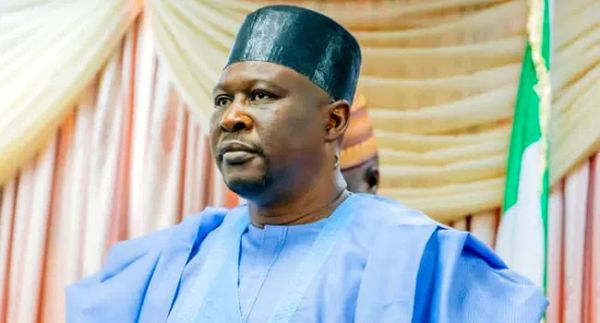 Four persons have reportedly died from a ghastly accident involving a Toyota Hilux conveying a detachment of vigilantes, accompanying Governor of Adamawa State, Ahmadu Fintiri, while enroute Mubi for a campaign engagement.

The accident which occurred around Fadamareke, in Hong Local Government, allegedly linked to overspeeding while negotiating a dangerous bend, involved a RAMP 2 Toyota Hilux van used by Head of Fintiri’s vigilante.

Three lifeless bodies of occupants in the van that includes Bako Kaura, head of PDP’s informal security arm and another victim identified as Adamu, Kaura’s biological son have been deposited at the mortuary of Hong Federal Medical Centre.

Five other occupants in the van who sustained various degree of injuries, were conveyed in the government house ambulance and another unmarked Hilux van, for treatment in a health facility. Governor Fintiri’s personal physician and head of the government house clinic, Dr. William Teri, who was among the first responders at the crash also conveyed the victims to a hospital for treatment.

According to The Punch, a source at the scene of the accident who helped with the evacuation and rescue effort, however disclosed to the Newspaper “I took out three lifeless bodies, but there’s a fourth that I think can hardly make it out of coma because of the injury he sustained. There were about nine occupants in the Ramp 2 Hilux van the head of vigilantes for Fintiri/Farauta campaign involved in the accident was traveling in.”

Only last week, Governor Fintiri narrowly escaped death by the whispers when a truck which lost control almost rammed into his stationary motorcade. Unfortunately, two vehicles on his convoy, were not so lucky as the truck crushed into them.

The incident occurred around the high brow, Dougirei Hilltop Agga Mosque, where the governor had gone to attend a wedding engagement.

Two policemen who sustained fatal injuries from the crash, were rushed to intensive care unit of the state specialist hospital.