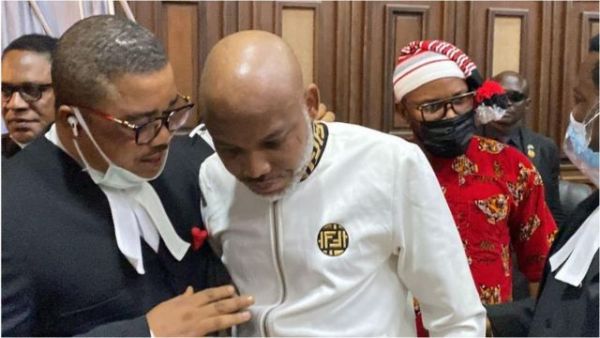 A federal high court in Anambra has ordered the Nigeria Police Force (NPF) and the Department of State Services (DSS) to pay N150 million as damages for killing one Samuel Okoro, personal assistant of Ifeanyi Ejiofor, lawyer to Nnamdi Kanu.

Hyeladzira Nganjiwa, the presiding judge, issued the order on October 27 while delivering judgment in a suit filed by Felicia Okoro, wife of the deceased, against the NPF, the inspector-general of police (IGP) and the DSS.

Other defendants include the director-general of the DSS, Nigerian Security and Civil Defence Corps (NSCDC), the Nigerian army, the chief of army staff and one Chukwuka Chizorom Ofoegbu.

On June 6, joint security operatives invaded Ejiofor’s home in Umunakwa Ifite, Oraifite, Ekwusigo LGA of Anambra state at around 2:30am.

Ejiofor’s elder brother and three domestic staff were abducted while Okoro was murdered.

Okoro’s body was allegedly put inside Ejiofor’s car which was then set ablaze.

CCTV footage which captured the invasion was tendered as exhibits in court.

While delivering the ruling, the judge declared the invasion as illegal, unlawful, oppressive, and inhumane, noting that it constitutes a breach of Okoro’s fundamental rights to life.

“Before I conclude, I wish to state that after watching the CCTV footage, EXHIBIT A, I ran out of words to express my feelings to what I saw,” the judge said.

“I couldn’t believe what I saw was carried out by human beings like us and the applicant. It was unfortunate and unbelievable. They didn’t only take the laws into their hands but behaved as if they are God who created life including Mr Samuel Okoro, the late husband of the applicant.

“Even if he had committed murder, the respondents went too far by taking laws into their hands.

“The applicant and her son have been thrown into untold hardship, depression and trauma both mentally, psychologically and socially.

“The applicant’s late Husband was the breadwinner to his aged parents. The children have lost their father and no doubt it shall affect their academic pursuit looking up to their mother and God only to succeed in life.

“Again, the applicant’s husband lost his life out of overzealous officers’ acts, who to my mind are callous-hearted human beings. They are not supposed to be in the service nor given responsibilities. May the soul of the departed, rest in perfect peace Amen.

“No amount of compensation can bring him back to life and the loss or injury suffered cannot be healed forever. It is really very sad and unfortunate. They should be brought to book.”

The judge ordered the police, DSS, army and Chizorom to tender an unreserved public apology to the applicant (Felicia Okoro) in one national and domestic newspaper.

The court also ordered them to pay the sum of N100 million as general damages and another N50 million as compensation in favour of Okoro over the death of her husband.

The court also ordered the NPF, DSS, Nigerian army and Chizorom to pay the applicant five million naira as the cost of prosecuting the suit.