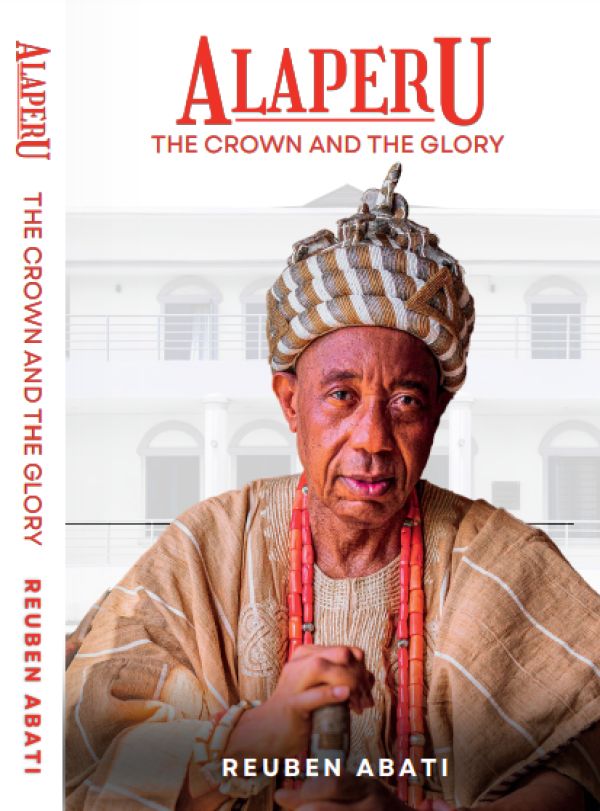 ALAPERU: THE THRONE, AND THE GLORY

The review of the book in honor of the Alaperu of Iperu, Remo Land today 26th November 2022 by HRM Oba (Prof) AbdulKabir Adeyemi Obalanlege.

⦁ Please permit me to start this endeavor by acknowledging the author of this book Dr. Reuben Abati, a phenomenon who represents and has his hands in the three components of any successful book project; knowledge production, book publication, and media promotion. Dr. Abati is an intellectual, author, communicator, and media guru. Added to his feathers is his depth, and practical experience of Nigeria’s government and politics all of which he has laid bare by gesturing Oba Adeleke Adelekan Idowu Basibo, the Alaperu of Iperu Remo, the honor of a book that befits his stature and reverence.

⦁ The title of the book Alaperu: The Crown and The Glory grabs attention, the ideas are original, with contemporary significance. The book is unique in many ways, it not only tells the story of Alaperu, but it also helps to critically appraise the matter, values, sense, and importance of his revered Alaperu stool, and his contribution to Iperu land.

⦁ It also calls into reflection a whole range of assumptions about the life of Alaperu. And as demonstrated in the first chapter, it stretched to introspecting, analyzing, and prescribing a role of significance for traditional institutions in Nigeria. As a traditional ruler myself, I have taken a perspective that differs radically from any of the approaches I have seen in recent times. And that same perspective I believe could be a clue to strengthening the traditional institution in Nigeria, and advocating the moral efficacy of traditional stool. The book is systematically divided into nine chapters and arranged in orderly and sequential forms such that it adds suspense, glamour, and style to the literature. 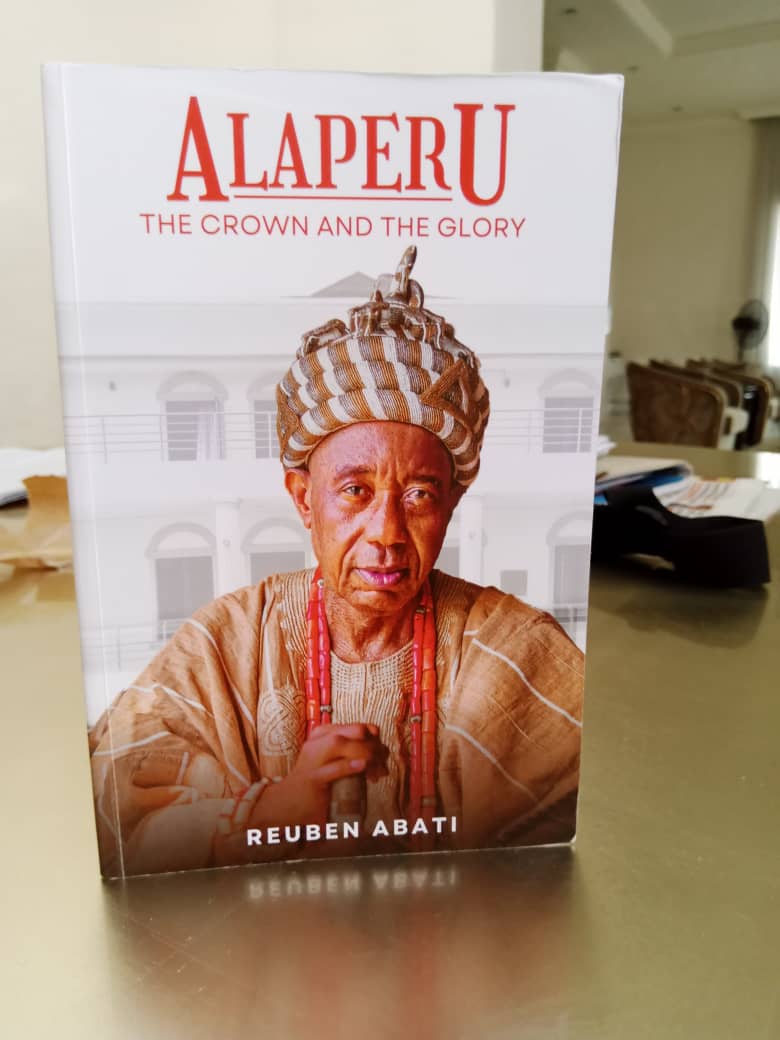 ⦁ One of the lessons worth emphasizing in the first chapter which is an introduction is the same as the gist of Pixelberry’s novel, The

Crown & The Flame. The story revolves around the choices we make and the value attached to the prestige, and honor with which we do things. It goes on to narrate how the fall of Kenna’s kingdom was helped to being restored by Dominic Hunter who could risk his life, and comfort hiding as spies among the kitchen staff of the usurper just because he sees honor, prestige, and dignity in retrieving Ken’s kingdom.

⦁ The interpretation I made from this parable is that Kenna Rys had long-time committed his stool to reputation, dignity, and prestige causing Dominic to see the usurping of Ken’s kingdom as an aberration. This is the same character the author in the first chapter presented the Emir of Kano, Muhammad Sanusi II who like his grandfather had a reputation, and honor for speaking his mind no matter whose ox was gored. Meanwhile, like Kenna Rys, Muhammad Sanusi II was removed and exiled.

⦁ What then follows in the succeeding narratives was the author’s seeming discomfort with the traditional stool depicting subservience and sycophancy, unlike in the past when it symbolizes honor, reputation, and prestige. He summarized it as a conflict between tradition and modernity and echoed the demand for constitutional roles for traditional rulers within a democratic framework as a hypothetical measure to resolve the conflict. The chapter also touches on the history and trajectory of the traditional institution in Nigeria, from the period before colonialism, during colonization, and its operation in the post-colonial era traversing the political spectrum in Nigeria’s post-independence era.

⦁ The second chapter, the customs officer, introduced the subject, Alaperu of Iperu Remo, Oba Adeleke Adelekan Idowu Basibo from the cradle. Alaperu was no doubt a prince from one of the three Royal families in Iperu land, the Odoru Dynasty. He was well nurtured and his parents gave him the best education that was in vogue at that time. He also studied at Morley College and South Bank University at Elephant and Castle in London. He is a sportsman. He studied Economics and Shipping and Marine operations. He is sociable, he worked as a customs officer and left service meritoriously to ascend the throne of his forbears. What I considered fascinating and expository as revealed in this chapter is the dynamics and diversity of cultural realities and practices even among intra-ethnic relations in Yoruba land which may have originated from the acts of sanctifying retrogressive mythologies that are unhelpful for socio-economic development and political advancement. It is revealing that Oba Adeleke Adelekan Idowu Basibo descended from the female line of the Basibo royal family. He is a grandson of Metuluko, the daughter of Oba Basibo III. With this, I hope gender and comparative studies scholars will find this yet another example in their research endeavors, and this book a worthy material for patronage. 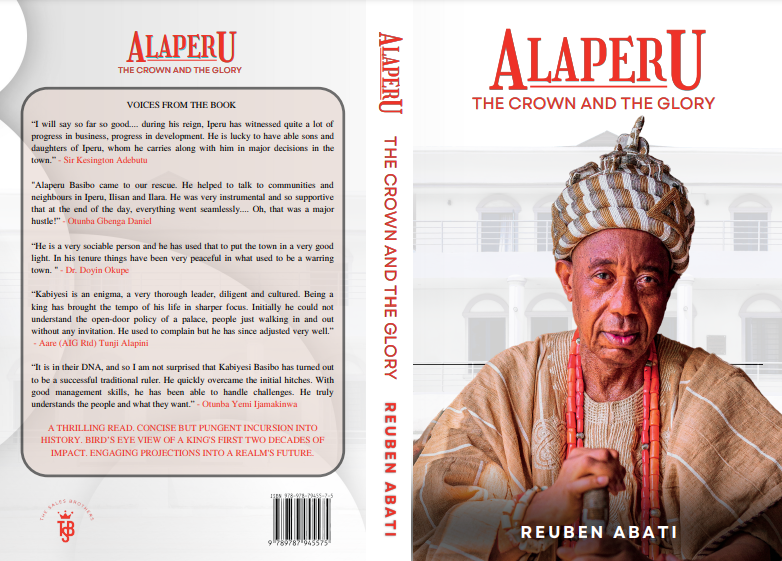 Chapter three is titled The Road to Alaperu Throne. Of the truth, the contest to become a king, especially in Yoruba land follows a lot of intrigues, politics, and financial muscling. I quite agree with the author that the enormity of the stool of Iperu land, and especially the prominence of the quality of subjects in the kingdom could invoke the wish of anyone to ascend the throne of the Alaperu of Iperu. However, experience has shown that power belongs to God, and only He can give it, and he freely chooses to honor anyone he feels he wishes to honor with power. The author revealed how destiny met nobility. It was destined and predicted that HRH Oba Adeleke Basibo will be crowned king, so, the road to Alaperu’s throne was a crow fly, that on 7th February 2002, he received his appointment letter as the Alaperu of Iperu. 9. Chapter four captured the Ipebi and coronation ceremony of Alaperu. The author described Ipebi as a place of seclusion where the king is expected to perform certain traditional rites and learn about the history, tradition, and conventions of the town which he is expected to rule with. The author established the dissimilarities in the number of days in Ipebi according to different communities. While it is 3 months or 2 months elsewhere, he noted that the seclusion period takes 19 days, going to the experience of Alaperu Oba Idowu Basibo. And he completed the rites on March 15, 2002, while the Coronation Day, and the presentation of staff of office was held on Saturday, March 30, 2002, at the Christ Apostolic Grammar School grounds along the old Ibadan Road, Iperu.

Chapter five deals with Iperu Akesan. The chapter dwells on the historical, social, economic, and political importance of Iperu land. The author went on to tell us that Iperu is the most populous town in the Remo Region of Ikenne Local Government Area in Ogun State, with a current population estimate of about 250,000. He also mentioned how Iperu has a connection with Awujale of Ijebu, Epe, and Oyo. The discussed the Iperu war, how it was fought, and how it ended was equally documented in the chapter. 11. Chapter six examined the challenges of Oba Adeleke Basibo since he ascended the throne while chapter eight discussed his achievements. The approach that the author devised to compose these two chapters is what I have found creatively unique. While Oba Adeleke Basibo recounts his challenges himself, his subjects gave accounts of his achievements so far. 12. Chapter eight is titled Reflections but we may consider it more appropriate as Alaperu’s Philosophies. Because the chapter entails his ideas and ideals on varied aspects of the society ranging from politics, tradition, governance, socio-economic policy, education, and the lingering secession agitations. 13. The last chapter Epilogue and New Beginning sets an agenda for the future. Then how best can the author honor the Alaperu if not closing this book with remarks, greetings, prayers, and best wishes from our indefatigable executive Governor of Ogun state, Prince Dapo Abiodun. Ladies and gentlemen, based on my assessment as an academic, and monarch, I found this book informative, inquisitive, and expressive such that it is worthy to recommend, and I am recommending it to the public. Let me conclude by congratulating our dear 21st Alaperu of Iperu, Oba Adeleke Adelekan Idowu Basibo on your glorious 20th anniversary on the throne of your forebears. I join the Governor and the government of Ogun state, your entire family, friends, and well-wishers in wishing you more years on the throne, in good health, increasing wealth, wisdom, and knowledge to continue to guide and lead your subjects to the Promised Land. Amen. 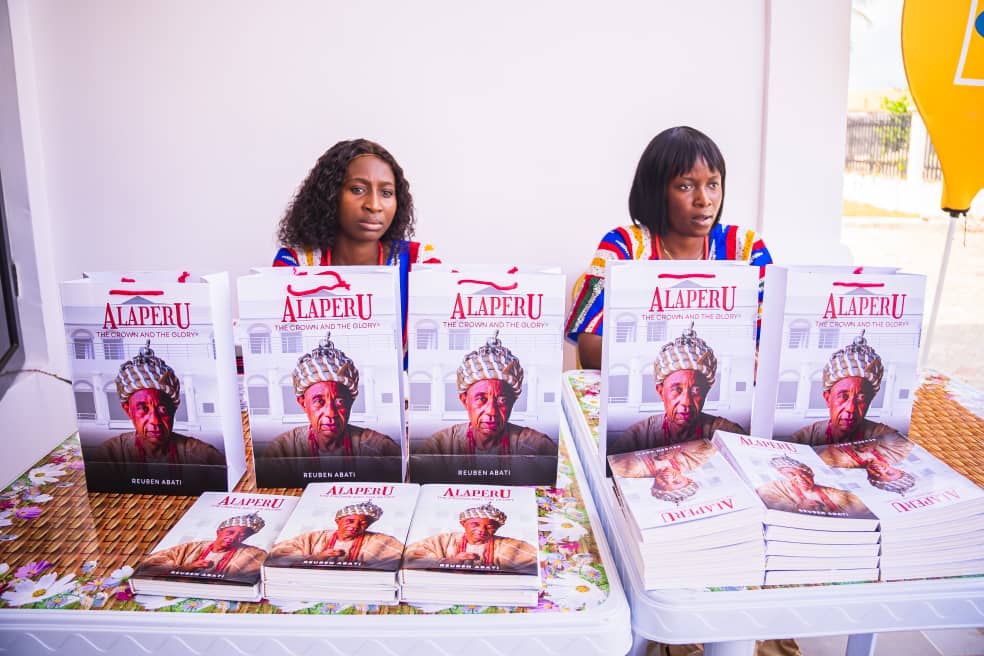