2023: Tinubu, Shettima Jet Out To London Ahead Of Campaigns 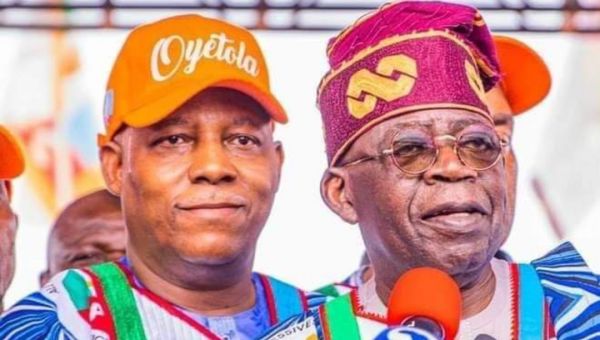 The presidential candidate of the All Progressives Congress (APC), Bola Ahmed Tinubu and his running mate, Senator Kashim Shettima, have traveled to London, the United Kingdom.

Naija News learned that Tinubu and Shettima left the country on Saturday ahead of the start of the electioneering campaigns on Wednesday, September 28.

In a chat with The Punch, the spokesperson for Tinubu-Shettima Presidential Campaign Council, Bayo Onanuga, confirmed that the duo went to London for vacation.

According to Onanuga, Tinubu and his running mate will be out of the country for a week to prepare them for campaigns and will return to the country in the first week of October.

He said: “He only took a week break for vacation.”

Onanuga also disclosed that Tinubu’s campaign would begin on October 8 and his policy document will be ready and unveiled before October 2.

He, however, revealed that the council will kick off the campaigns with a special prayer in all the APC branches nationwide.

He added: “Although the campaign will flag off on October 8, we will kick off the stipulated September 28 date with a prayer in all the APC branches nationwide.

“After committing the day to God, we will embark on road work in Abuja. However, I am sure the policy document will be ready before October 2.”