Says no aspirant has been disqualified

The seven-member presidential screening committee of the All Progressives Congress (APC) has shortlisted 13 aspirants to participate in the presidential primary election billed to hold on Monday.

LEADERSHIP had reported exclusively on Thursday that the committee was preparing a shortlist of nine for the consideration of the party APC leadership.

Earlier Friday, speculations about “disqualification” of some of the presidential aspirants were rife following the failure of Oyegun, who briefed journalists after submitting the report, to name the 13 aspirants on his committee’s shortlist.

But dependable sources in the presidency who have seen the full report however told our correspondent last night that the said media reports suggesting that ten candidates had been disqualified were not true.

According to one of the sources, all 23 aspirants screened were cleared and qualified, but the committee recommended a “safe list” of 13 names. 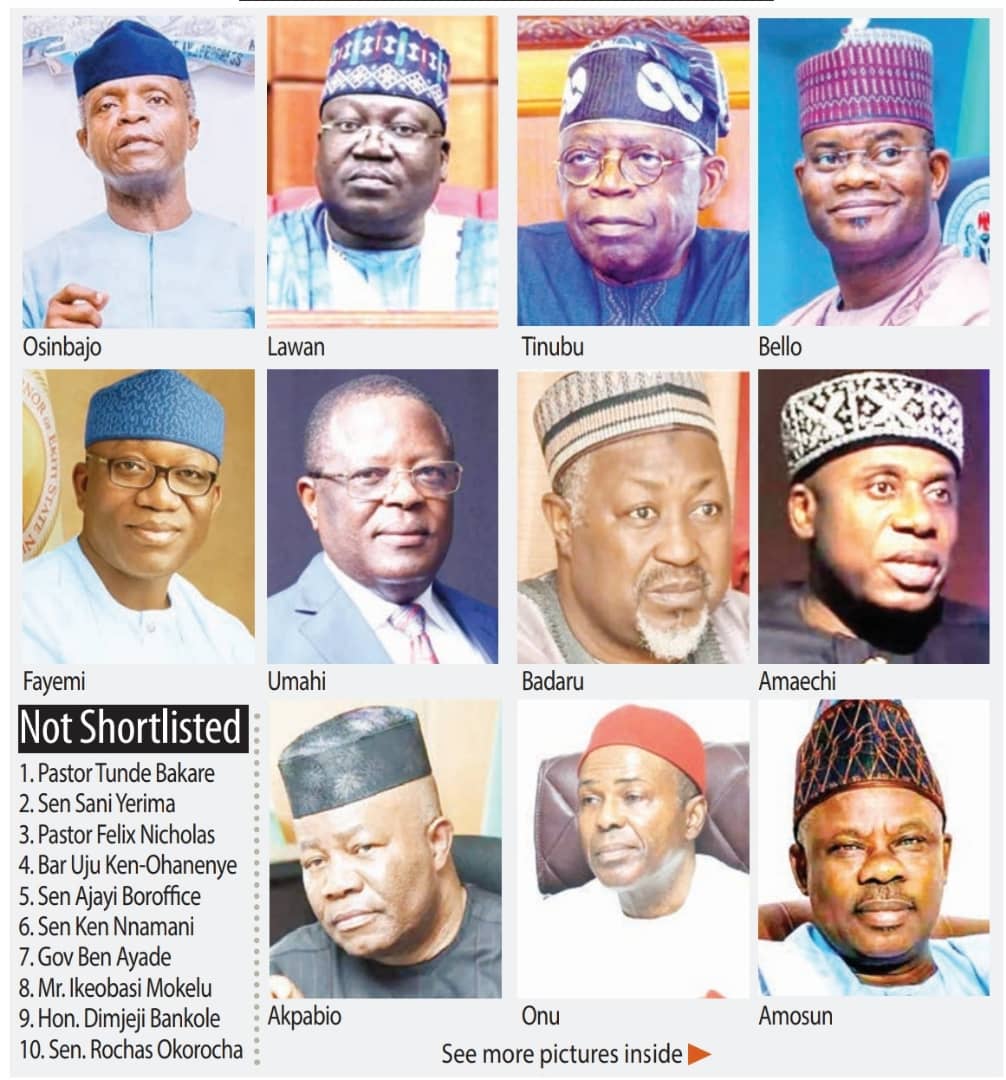 Two other aspirants, former minister of the Niger Delta, Godswill Akpabio and Mr Tein Jack-Rich, were also believed to have made the list after the committee submitted its report yesterday afternoon.

Others are former Minister of Information and Culture, Ikeobasi Mokelu; former Speaker of the House of Representatives, Demeji Bankole; US-based Pastor, Felix Nicholas, and the only APC female aspirant, Uju Ken-Ohanenye.

Our source who did not want his name in print because he is not authorised to speak on the matter said, “The committee did not disqualify anyone. I don’t know where the news about disqualification came from. The report made it clear that all the aspirants had been cleared and were qualified to contest in their own right.”

Another source close to the committee said the decision of the committee to recommend a “safe list” was based on the large number of aspirants who appeared for screening.

The source said, “During the screening, the aspirants told the committee that they were ready to accept a consensus candidate in the interest of the party. The only exception out of the 23 was Tinubu, who said he would only accept consensus if he was the beneficiary. That being the case, what is the point of going into the primary, which is only a few days away, with a horde of aspirants?”

On the basis for making the “safe list,” the source said electability and the complexity of the country’s makeup were considered, among other things.

“Apart from these two criteria, the committee also tried to avoid the potential of litigation and also the extent and degree of field work that the aspirants undertook,” the source noted, adding that “this last point weighed heavily on the committee’s mind because the committee wanted to recommend people who had actually gone out there to work.”

The source added that the party or President Muhammadu Buhari, who is its leader, was free to go outside the committee’s list to add or remove aspirants.

Meanwhile, chairman of the screening committee, Odigie-Oyegun yesterday the reasons why his committee pruned the number of presidential aspirants from 23 to 13.

While submitting the report to the party leadership at the national secretariat, Oyegun said the committee would have gone a little shorter than 13 but chose to allow the party to decide who their preferred candidate will be.

He said: “First, we had 23 member aspirants that we interacted with. And my first comment is that we were very occupant. Those were 23 that presented themselves. We had a lot of others, prominent Nigerians both within and outside the country that had applied but for whatever reason, could not proceed with their applications.”

“The second point I want to make is that we were surprised at the active participation of the youthful members of the party. Some of them surprised us with what they have accomplished in life, their understanding of the situation in this country and why they want to have the privilege of governing this country.

“What was important was that they so believed in the country and the party that they were able to pay the sum that some of us considered princely handsome to participate in the process. And I think the party ought to pat itself on the back for them.”

On the criteria relied on to screen the aspirants, Oyegun said. “Aside from the basic background, experience and understanding of the Nigerian situation, the ideas as to how issues, difficulties and problems can be addressed were key factors that were considered.

“Our report is simple and short. I don’t want to beat the bush. There were two aspects to it: The basic constitutional qualifications for you to aspire to be a president of the Federal Republic to of Nigeria. That was simple.”