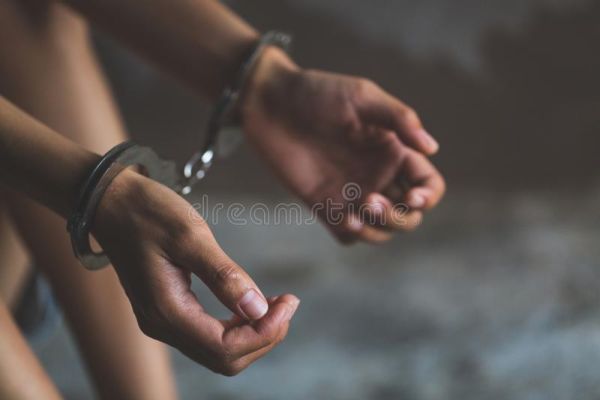 There was pandemonium in Yonen community ,Ugep , Yakurr Local Government Area of Cross River following the slaughtering of an 11 months old baby by his mother identified as Mrs. Blessing Eno who claimed she was sent to do so by a “Spirit”.

The tragic incident which occured Tuesday has left many in the community bewildered as the circumstances leading to the dastardly act has remained strange.

Checks by Vanguard showed mother of two who may be suffering from Schizophrenia (Mental Disorder) took out a matchet and cut off the head of the baby, claiming that the child was disturbing her and a spirit instructed her to slaughter the boy.

An eyewitness who pleaded anonymity disclosed that it was her eight year old son who stumbled on the gory sight of his headless brother and a blood drenched mother who raised the alarm that attracted neighbours to the scene of the crime.

However, the timely intervention of the police, who immidiately took the lady into protective custody, before ferrying her out of Ugep averted an angry mob from extra judicially killing her at the station.

Meanwhile, the Obol Lopon of Ugep and Paramount Ruler of Yakurr LGA, HRM. Obol Ofem Ubana Eteng, has expressed shock over the tragic incident while calling for calm.

The Monarch also, assured the people that he was certain that the police will handle the matter professionally to a logical conclusion.

He said :” I had to immediately convene a meeting with my subjects because even though what happened has desecrated the land, I had to ensure that further bloodshed was averted.

“We appealed directly to young people in Ugep, to tow the path of peace and rational thought in the face of this heinous crime and they positively responded.

“We are in shock but we are calm and have left this matter in the hands of the police, I can assure you that there will be no reprisal action because we must remain law abiding,” he said .

When contacted , the Police Public Relations Officer, SP Irene Ugbo confirmed the incident, adding that it was a homicide case and the matter was being transferred to State CID , Homicide department for onward investigation.

“I learned about the matter yesterday ( Tuesday) , you know it’s a homicide case, it will be transferred from Ugep to state CID, Homicide department for further investigation.

” it is quite unfortunate and devastating, already she is in protective custody , but the matter will surely be brought to Calabar,” Ugbo said.

On his part , a Child rights activist and Principal Counsel Basic rights Council Initiative BCRI, James Ibor Esq said there was no doubt the lady in question was mentally unstable.

He said when properly examined, her true state of mind would be ascertained.