I’m Not A Fan Of Ronaldo – Mikel Obi 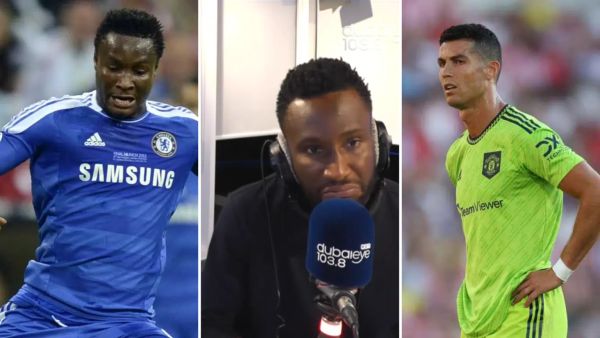 The former Chelsea star has revealed that he has never been a fan of the five-time Ballon d’Or winner following his controversial interview.

Naija News recalls that the Portugal talisman had an explosive interview with Veteran Journalist Piers Morgan, which has refused to leave the lips of every fan in the football community.

In the controversial interview, the former Juventus forward blasted the Manchester United club owner and the club for betraying him and his manager for disrespecting him.

However, over the last 15 years, Ronaldo and Lionel Messi of Paris Saint-Germain have engaged in a heated debate over who is the finest player of their generation.

But Mikel Obi feels that Ronaldo is put on a lesser platform than the Argentine maestro because of his overinflated ego.

The Nigerian, in a chat with Dubaieye1038fm, said, “I’ve never been a Ronaldo fan really,”

“For me, when a player has so much ego, I don’t really get it. He’s never been one of my favourite players and that’s why I always go for Messi really.”

Mikel calls it a horrific circumstance as he criticizes Ronaldo for going off in public against the owners of Manchester United.

“It’s just a horrible scenario, he’s done so much for the club, and to see it end this way, it’s just horrible. On his part really, I would say that interview shouldn’t have been done, wrong timing as well.

“It’s just not right. It doesn’t look right for such a player that has achieved so much in the game,” he said.